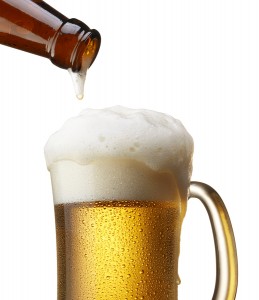 Question: I’m exclusively breastfeeding my three month old. Breastfeeding is going well, but I feel like my supply has gone down since I went back to work a month ago. My friend told me that drinking a beer at bedtime will increase my milk production. Is that true? Will beer increase my milk supply?

Answer: Unfortunately, no. I wish it was that easy. There are many things nursing moms can do to increase their milk production, but drinking beer isn’t one of them.

For many decades, nursing moms have been told that drinking beer will increase their milk supply. The yeast in beer (especially dark beer) was believed to be a natural galactoogue (substance that increases milk production) and the alcohol in the beer supposedly relaxed the mother’s nerves so that her milk would let down more quickly. Beer is typically made from water, grain, hops, and yeast. The yeast found in beer is believed to increase milk supply, but there is no evidence based research to indicate that.

The fact is that not only does alcohol not stimulate milk production, but it may actually inhibit the let-down reflex and reduce the amount of milk the baby receives.

The biggest factor in stimulating milk production is frequent removal of milk from the breasts. Breast milk is produced on a supply and demand basis: the more often and effectively the milk is removed, the more your body gets the signals to make more milk. Conditions in the mother, like inverted nipples, yeast, or maternal medications like birth control pills can reduce the amount of milk of milk produced and removed from the breast. Conditions in the baby like tongue-tie or prematurity can also result in less efficient milk removal.

In the majority of cases, milk supply can be increased by addressing and correcting these problems. In the meantime, manually removing the milk via pumping or hand expression can help maintain the mom’s milk supply.

Fenugreek is the most widely used galactogue, and Brewer’s Yeast is the second most common. The two of them are often used together, and many moms swear by them (although there isn’t any scientific evidence to to show that they work).

Because drinking beer adds extra unnecessary calories to a nursing mom’s diet (Regular beer has about 150 calories per can, and light beer contains about 100 calories), it’s better to take Brewer’s Yeast in tablet form, which doesn’t have the alcohol and extra calories that beer does.

Drinking a beer or two a day is unlikely to do any harm, but alcohol exposure should be limited, especially in newborns. Preemies and babies younger than three months metabolize alcohol more slowly than older babies.

In spite of the fact that there is no evidence to support it, many moms swear that drinking dark beer increases their supply, but this is most likely due to the placebo effect: they believe that drinking beer will relax them and increase their milk production, so it does.

The article Increasing Milk Supply has more detailed information about how to boost milk production.