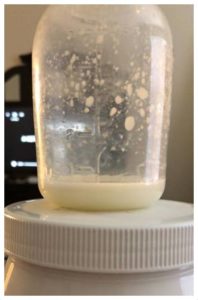 Question: I am trying to boost my supply for my six week old which seems to have dwindled for various reasons. One of the moms in my play group took Domperidone and said that it helped her produce a lot more milk. Do you think I should try it?

Answer: If you are concerned about your milk production and your baby’s weight gain, the most important thing to consider is your baby’s welfare. You need to work closely with his HCP and monitor his weight carefully. It helps to work with an IBCLC to develop a plan to increase your milk output, because many doctors aren’t knowledgeable about lactation management, even though many of them won’t admit it.

The first thing to determine is whether your supply is really low or not. Some mothers have unrealistic expectations, and feel that if their baby isn’t on a three hour schedule, or sleeping through the night by six weeks, or they can’t fill up several extra bottles a day to take to day care, then they must not have enough milk.

There are multiple factors that can contribute to an inadequate milk supply. These include issues relating to the mother (IGF, thyroid imbalance, maternal medication like hormonal birth control methods or antihistamines, yeast infections, flat or inverted nipples, returning to work, scheduling feedings) or related to the baby (prematurity, thrush, tongue-tie, reflux, cleft palate, Down Syndrome).

Domperidone can be helpful in any situation where increasing the pituitary’s production of prolactin would have a positive effect. If the issue isn’t connected to a lack of prolactin, then the medicine may not help. Many mothers take it for a month or two, but  may need to take it longer, sometimes even for as long as they continue to breastfeed. This is often the case for mothers who are re-lactating or nursing nursing an adopted baby.

Before taking medication to increase your production, you should first try to identify the problem and correct it using other methods.

Sometimes the solution is as simple as nursing or pumping more often, or adjusting positioning and improving baby’s latch. At other times, it may involve treating a medical condition like a yeast infection, correcting an anatomical problem like lip or tongue-tie, using a more efficient breast pump, or changing medication.

If all other methods of increasing milk production haven’t worked, there are two prescription medications available that may be used to increase milk supply: Metroclopromide (Reglan) and Domperidone (Motilium). Both are used to treat gastrointestinal disorders like reflux and vomiting in infants as well as adults, and both have the same side effect of increasing the pituitary gland’s production of prolactin (also known as the “milk making hormone”).

Both have been shown to increase milk production significantly in most cases, and are considered very safe for moms and babies. When deciding whether to use Domperidone, you may want to assess your prolactin level to see if it’s low. In a fully breastfeeding mother, levels are typically 100ng/mL or above at one-three months postpartum, and around 70ng/mL at six months. To check prolactin level, nursing moms should wait two hours after breastfeeding and then have their HCP draw a blood sample. If the level is below 10-50ng/mL, then the mother is considered ‘hypoprolactinemic’, and medications that increase prolactin production will probably help increase her milk supply. 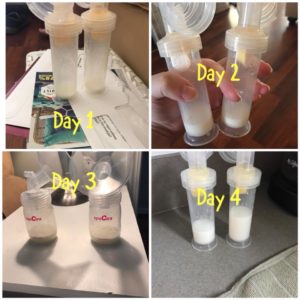 Both medications have side effects (as all herbs and medications do). However, Reglan has frequent more problematic side effects for moms like fatigue, irritability, and severe depression which have made its use for many nursing mothers unacceptable.

Domperidone is a safer and more effective drug that works even better than Reglan. It has been used in Canada and many other countries for decades, In some countries, it is available OTC (without a prescription). It has fewer side effects than Reglan because it does not enter the brain tissue in significant amounts. It doesn’t cross the blood-brain barrier that keeps medication from passing into the milk the way that Reglan does.

Within the medical establishment, there is a controversy over use of Domperidone.  In 2004, the U.S. Federal Drug Administration put out a warning about Domperidone for possible cardiac side effects that were reported when this medication was given in large doses intravenously.  It’s important to know that even though these side effects have never been reported when the medication is taken by mouth,  it may be difficult to obtain Domperidone in the United States. Because of the possibility of side effects, mothers with heart conditions should not use Domperidone.

IMO, the FDA and the medical establishment in the US are using scare tactics to keep moms from using a drug proven to be safe and effective, because they are so liability oriented that it’s ridiculous. This isn’t some experimental drug. It’s been used for years, given directly to tiny babies, and can make the difference between continuing to nurse your baby or not. As is the case with all medications, it’s best to take the smallest amount possible for the shortest amount of time possible in order to achieve the desired results. Once you decide you no longer need to take Domperidone, you should taper off gradually.

In the US, it  may be difficult to get a prescription for Domperidone from a doctor either because they aren’t familiar with it or because they’re afraid of the side effects that they have heard about when it is given by IV. Fortunately, there are other ways to obtain Domepridone safely and legally, even if you can’t get your HCP to prescribe it or locate a compounding pharmacy to make it for you.

If you believe that breastfeeding  provides important benefits for mothers and babies, and you have ruled out causes like tongue-tie, do your research to find the information and facts that you need to make your own informed decision about whether you want to consider using Domperidone to increase your supply. The Facebook support group  Domperidone for Breastfeeding: Supply and Support has tons of information and support to help you decide whether Domperidone will be a part of your breastfeeding journey, as well as resources on how to obtain it legally and safely.

Not Everyone Can Breastfeed : Insufficient Glandular Tissue (IGT) or hypoplastic breast syndrome:

Domperidone in the US; InfantRisk Center; Dr. Thomas Hale, 2012