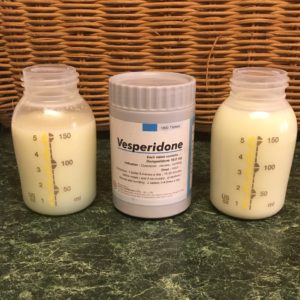 Hi everyone, my name is Kim and I have been breastfeeding for almost 29 months now! I have been on Domperidone for close to a year and am excited to share my experience with you.

My journey all started in April, 2016. I had just had an awesome, peaceful water birth, finally holding my sweet girl I had been so eager to meet… and now the time comes to latch. What a moment! Shortly after that blissful golden hour I realized something wasn’t right and the struggles began.

For sake of time and topic I’ll be brief. Eight weeks and four lactation consultants later we found out she had a tongue tie. Once revised it was like a whole different ball game. I was finally enjoying breastfeeding and it started to feel natural. A month later I went back to work and my supply did great for quite a while. I am so blessed to have have an employer that still supports me pumping at work!

Around eleven months postpartum is when things began to change and become stressful. My period returned and I was having supply dips not only during my period but when I would ovulate. I started to pump less and less with my child still preferring breast milk over food. I tried power pumping, heat packs, middle of the night pumps and so so many herbal supplements. Nothing worked for me. I began to worry our journey would be over before my girl was ready to wean. I’m sure some of you reading can really relate! So fast forward a few months and I find out about Domperidone via a Google research session.

I read about Domperidone day and night for what felt like days making sure it would be safe for myself, but most importantly safe for my baby. Domperidone is a serious medication and should be treated as such.  I would highly encourage reading studies and doing some research before deciding if Domperidone is for you. I was concerned about side effects and how Domperidone works. ‘Dom’, as most of us call it, works by increasing prolactin levels. It does this by blocking dopamine D2 receptors and has an effect on serotonin receptors as well. Lactation is actually a side effect of the medication. The original purpose for Dom is a gastrointestinal motility drug. In many countries, it’s available over the counter to treat reflux and nausea.

After doing research, I reached out to my Midwife and asked her to order blood work for my prolactin level.  Just as expected it came back very low for a lactating woman. That’s when I decided Domperidone was worth a try and joined a support group on Facebook (Domperidone for Breastfeeding: Supply and Support).

I spent a lot of time surfing the group page reading posts and asking questions. I learned about how to order Dom as it is not FDA approved for lactation in the USA. I know this sounds scary but Domperidone  is prescribed in many countries to induce/ increase lactation. It is not illegal in the United States. So I ordered my first shipment and waited as patiently as I could. The group has been so helpful in supporting me through my journey and inspiring me to research Dom even more. It’s nice to log on and be among women who know exactly what it’s like to walk in my shoes. They know low supply can be a consuming struggle and don’t say frustrating things like “eat more oatmeal!” I now like to help other women who are just beginning their journey within the group. I find it cathartic in a way to share information and support struggling women. The group is a safe place to share whatever is on your mind in relation to breastfeeding. Pretty often I will see an “I just got my Domperidone and now I feel scared” post. Which takes me right back to when I opened the mailbox and saw the little brown box sitting there.

I remember the day it arrived in the mail. I was excited and terrified at the same time. I went ahead and took my first dose. Shortly after I began to feel itchy with a slight headache. I had done my research and knew these were normal side effects. So I continued with the doses and waited to see my supply increase. Most mothers see an increase within a few days (some as little as overnight!), but it may take a full six weeks to see the maximum increase.

A few days later it was happening for me, a week later even more milk and within three weeks I was making double the milk I had been before Domperidone! My daughter was staying at the breast longer, I was pumping more at work and I couldn’t have been happier. It was then I decided to try a less expensive brand. This is when I began to experience some less than desirable side effects. I felt depressed, had no energy and my milk supply was starting to dip. With a switch back to the other brand my side effects dissipated and my milk supply jumped back up. Different brands of Domperidone are compounded with different filler ingredients and all can react differently in the body, even though the active ingredient is the same and the same amount in all brands. Some brand names for Domperidone are Vomistop, Motilium, Domperon, and Vesperidone.

It is important to note that it can take a while to find your sweet spot dosage and honestly I think some of us never do. We just keep adding or cutting a pill here and there until we are ready to wean. Which brings up another important issue.

I touched on Dom blocking dopamine receptors earlier; It is important to properly wean off of Domperidone so that the body has time to adjust to producing enough dopamine again. If weaning is done too quickly or if a person stops cold turkey it can cause a shock to the D2 receptors causing withdrawal symptoms. Worst case scenario of stopping cold turkey is permanent damage to the D2 receptors. The most common withdrawal symptoms women experience are headaches, depression, agitation and anxiety.

I am now beginning the weaning process. As my daughter nurses less these days my supply is beginning to go back down and regulate but she is still content. Domperidone is allowing us to wean at her pace and not a moment before she is ready, for that I am so grateful.

Domperidone for Breastfeeding: Supply and Support

Kim is Mommy to this sweet little nugget, Paisley. She has been on her breastfeeding journey for 29 months now! She is currently working to become a La Leche League Leader and works part-time by trade as a pastry chef. After becoming a Mom she has gained an intense passion for helping other Mommas. One way she likes to help is by donating milk through Human Milk for Human Babies. She just hit 11 gallons donated this month! Her breastfeeding journey started on a pretty rough and rocky road as Paisley was born tongue tied. Through that struggle she gained a passion for breastfeeding, baby-wearing and soaking in all the knowledge she could. Here’s a snap of them at The Global Big Latch-on event this year. 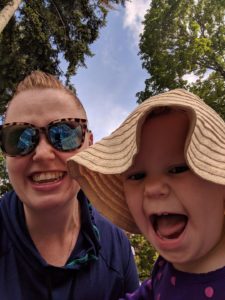