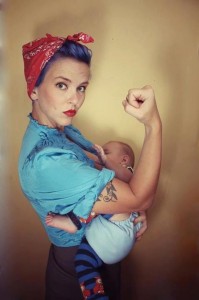 Over the past forty years of working with nursing moms and babies (first as a La Leche League Leader, and then as an IBCLC),  I’ve seen a lot of changes come and go in the lactation world. There has been a lot of old school advice about breastfeeding that was not only incorrect, but also sounds more than a little crazy based on what we know now.

For example, moms used to be advised that one way to prevent sore nipples was to toughen them up by scrubbing them with fine sandpaper during the last few weeks of pregnancy. Doctors later backed off on the whole sandpaper thing and began telling moms to scrub the nipples vigorously with a washcloth instead, which of course hurt like crazy and didn’t do a thing to prevent sore nipples. But who knew? Moms didn’t dare to question their doctor’s ‘expert’ advice.

Mothers were instructed to schedule feedings for every four hours, told that their baby needed cereal at six weeks, and warned that if they developed mastitis, they should stop nursing because their milk would become infected.

Moms today are much more educated  about breastfeeding, and more support and information is available to them than ever before.

In spite of this, misconceptions and misinformation abound.  It’s not that moms don’t know enough about breastfeeding, but the fact that they now have access to way too much information right at the touch of their fingertips. Google and Mommy Blogs didn’t exist until the last few years.

The problem is that the  wrong information can do just as much damage as no information at all. After decades of climbing breastfeeding rates (20% in the ‘70s when my first baby was born, and today close to 80%) and the 24/7 access to information about lactation, I’m constantly amazed at how much bad advice there is on the net, and how hard it is to tell the good from the bad.

If a mom today was told  to toughen her nipples up with sandpaper,  she’d question that advice, probably by saying “HELL NO” to her doctor’s face.

Other advice is accepted without question, especially when it comes from a trusted health care provider.

Here are six very common myths about breastfeeding that are still widely distributed and accepted, and why you need to question them (even if your doctor is the one giving you the advice):

1)”If your nipples are sore, it’s because your baby isn’t latched on correctly.”

Not always. While it’s true that the most common cause of nipple soreness is  a less than perfect latch, it isn’t always quite that simple. Positioning a baby for optimal latching is something that comes effortlessly to some moms and babies, but for most it takes some practice to get it right. Even though breastfeeding isn’t supposed to hurt, most mothers will experience some degree of soreness (ranging from slight tenderness to cracked and bleeding nipples) during the early days of nursing.  Even when the latch is perfect, there are other factors than can cause soreness. Tongue-tie, flat or inverted nipples, and yeast infections can all cause nipple damage, and until they’re treated, chances are that breastfeeding is going to continue to be painful, regardless of how the baby latches.

This seems like a no brainer to anyone who’s ever actually had a baby, but there are times when it’s a good idea. It’s easy to assume that a sleepy baby is a full, satisfied baby, but the reality is that newborns are notorious for sleeping through feedings.

In order to establish a good milk supply, babies need to nurse often – a minimum of 8 times a day, but more often 10-12 or more times in 24 hours. Babies who sleep for more than 3-4 hour stretches may not take in as much milk as they need, so it’s important to make sure they get in at least eight feedings a day, even if it means waking them up. Once your supply is established and baby is gaining weight, there isn’t any need to wake them for feedings and you can move to a more baby led schedule.

3) ”Giving water to jaundiced babies will flush the bilirubin out of their systems.”

Wrong.  Babies are born with extra red blood cells that their bodies have to process and get rid of because they no longer need them after birth. The cells are broken down in the baby’s liver, producing a yellow pigment called bilirubin. If the baby’s immature system can’t process the bilirubin fast enough, it can cause a yellowish tinge to the skin and cause jaundice.  If untreated, jaundice can cause medical issues, but in the majority of cases, it’s a very normal process.

Drinking water makes him pee, but since 97% of the bilirubin is excreted in the stool and only 3% in the urine, giving him water not only doesn’t ‘flush out’ the jaundice, but can actually increase the bilirubin levels. The water fills up his tummy and makes him less likely to want to nurse. The best way to prevent and treat jaundice is to  not to give water, but to breastfeed more.

Not true.  Over four million women in the US have babes, and nearly all of them will use at least one drug while they are pregnant or nursing, and their babies are just fine.

The transfer of drugs during pregnancy is different from the drug transfer during breastfeeding. The fetus receives the drugs taken by the mother directly into his bloodstream via the placenta, but during breastfeeding, the drug has to appear in the bloodstream before appearing in the milk. The breast acts like a sort of filter, and many drugs that might be considered risky during pregnancy are actually considered safe while breastfeeding.

Although many drugs do pass into breast milk, the amount is generally very small (most often less than 1% of the maternal dose), and the majority of medications can be taken without any harm to the baby.  The list of drugs which are actually unsafe for breastfeeding moms is very short.

For more information about the safety of drugs during lactation, see Drugs and Breastfeeding and When a Nursing Mother Gets Sick.

Research has shown over and over that instead of making babies more dependent, breastfeeding and natural weaning actually encourage independence. Children who form close bonds with their mother, and whose needs are met consistently and effectively from birth, grow to be more secure and ready to move on to the next developmental stage than babies who are fed on a schedule and weaned before they’re ready.

6) Babies should be weaned once they get teeth.

The average baby gets his first tooth at around six months, but babies can start teething much earlier or later and still be in the normal range. Four of my babies started teething between 6-8 months, but two got teeth when they were only 4 months old.  Since the The AAP (American Academy of Pediatrics) recommends nursing for at least 12 months, weaning a baby halfway the first year just because he started teething doesn’t make a lot of sense.

Many babies never ever bite at all, and most who try it once usually respond to your startled reaction by never doing it again. With some babies, it is a little harder to break the habit, but all babies, no matter how old, can learn not to bite.

The article Teething and Biting has more detailed information.

These are just a few of the breastfeeding myths that have persisted for decades. I’ll be sharing more in my next Mythbuster blog.

Exclusive Pumping: An Option for Some New Moms

Ask Anne… Question: I  have larger than average nipples and my baby girl is tiny. …