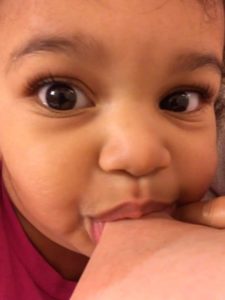 Question: My daughter is 12 months old and still breastfeeding several times a day.  For the past 2 months, my nipples have been very sore. She doesn’t bite me, but I have sores on the bottom of my nipples, and they crack and bleed when she nurses. I’ve tried changing positions and applying lanolin, but nothing helps. I don’t want to wean her yet, but it hurts so much that I dread every feeding. Please help!
Answer: It sounds like you have a toddler who still wants to breastfeed, but when she nurses, she pulls away from the breast and her teeth scrape the base of your nipples. She isn’t latching on correctly, and you aren’t correcting the poor latch. You wouldn’t let a newborn continue nursing while tears ran down your cheeks. You would know that something was wrong, and you would take her off and makes sure she was latched back on correctly. You need to do the same thing now that she’s a toddler.
When nipple soreness occurs with newborns, it’s usually because the baby isn’t taking enough of the nipple and areola in their mouth, and their tongue rubs the nipple raw. When you’re nursing a toddler and your nipples become sore, it’s often because their teeth are rubbing against the nipple. There are other things that can cause nipple soreness, like yeast infections and eczema, so you need to rule them out, but what you’re describing sounds more like pain associated with her teeth scraping your nipples. If she is latched on correctly, her tongue will be extended to cover the bottom teeth.
If she’s not pulled in close and doesn’t have her tongue extended enough, it could be due to the fact that she’s distracted by stuff going on around her, and she wants to look around with the nipple still in her mouth. She doesn’t understand that this hurts, and she isn’t biting you on purpose, but nursing this way can still cause wounds on the base of your nipples.
Try taking her off the breast as soon as she begins to pull away and the nipple starts to slide out of  her mouth.  Tell her to ‘open wide’, and show her what you mean by opening your mouth like you’re yawning. When she opens wide, pull her in close and make sure she has her mouth way back on the nipple and areola,  just the way she did when she was a newborn. She may get her feelings hurt a little when she is gently but in no uncertain terms removed from the breast with a frown and a “no, that hurts mommy when you don’t open wide”, but if she really wants to continue nursing, she needs to learn how to do it without hurting you, and she will – quite quickly if you’re consistent. She also might be telling you that she’s beginning to wean herself. If she does the pulling and scraping during the day, when she’s more likely to be distracted, and does it less at night and first thing in the morning, then she may be ready to drop all but the morning and night time feedings. If she pulls and tugs every time she nurses, she may be sending you signals that she’s ready to wean. The article  on Weaning has more info on how to tell if a baby is self weaning, and how to wean gradually, and with love, even if she’s ready to stop nursing before you want her to.

If she’s not ready to wean and is still really into nursing, then the tips in the article Teething and Biting may help. If she wants to continue to breastfeed, she can learn that biting or pulling away means not nursing for a bit.

If she has decided to self wean, there is absolutely no way to make her continue nursing, but there are so many benefits to nursing past a year that it’s worth the effort to try to keep her from weaning if you can.

Why do my nipples hurt when my toddler nurses?

If she’s not pulled in close and doesn’t have her tongue extended enough, it could be due to the fact that she’s distracted by stuff going on around her, and she wants to look around with the nipple still in her mouth. She doesn’t understand that this hurts, and she isn’t biting you on purpose, but nursing this way can still be painful.

I Should Talk About Weaning