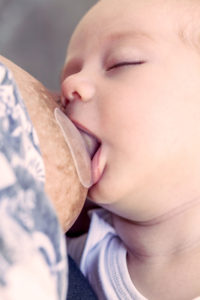 Question: I  have larger than average nipples and my baby girl is tiny. She is just now approaching five  pounds. When she was in the NICU they started her on bottles of formula and now she is very confused when I try to offer her my breast. Any advice would be appreciated. I feel like a slave to the shield!

Answer: I can appreciate your frustration at still being dependent on the shield. However, since your baby was premature, then the judicious use of a shield can be an invaluable asset in helping to maximize milk intake and keep her at the breast until she grows and matures and is able to feed like a healthy, full-term infant.

I don’t know how early she was or how old she is now, or how long your have been nursing her with the shield, but those are all factors that must be taken into consideration when weaning her off. Although there are no hard and fast rules, many premature or SGA (small for gestational age) babies don’t nurse effectively until they reach their full-term corrected age, or until they weigh around 6 pounds.

I don’t know how much you know about the history of nipple shields, but it may help you understand a little more about the pros and cons of using the shields in your particular situation.

Shields have been around in one form or another since the middle of the 16th century. They were used when a mother’s nipples were sore, and also when the nipples were large/flat/inverted, in order to make it easier for the baby to latch on. In the 1950’s, shields were used rather indiscriminately by by hospital nurses who didn’t know much about breastfeeding. They handed them out to just about every mother, because it was easier to do that than it was to spend time assisting the mother with appropriate latch on and positioning techniques, which would have prevented many of the cases of soreness that the shields were supposed to help with. There were several problems with this system: one was that the shields at that time were made of thick latex (the rubbery amber stuff) and sometimes were attached to a glass base. Some nurses even handed out regular bottle nipples and instructed mothers to put them over their nipple when they breastfed.

Because the shields were so thick, they caused a significant reduction in the amount of milk that babies received from the breast, with a resulting drop in milk production and lowered weight gain in the baby. Babies also became “addicted” to the rigid shape and feel of the shield, and often refused to nurse at the breast once mothers started using the shield. There has been at least one law suit settled in which a mother sued a hospital for handing out a shield without appropriate instruction and follow up on the risks of weight loss in the baby. Due to these concerns, some hospitals began requiring the mother to sign a consent form stating that she understands the risks involved before they will give her a nipple shield.

For many years, shields were used infrequently by health care providers, so very few of them learned the techniques involved in using them appropriately. They got such a bad reputation that it was often almost impossible to find them, and most lactation consultants hesitated to recommend their use, even in cases where it might have been helpful.

However, things have changed in the past several years. Newer shields made out of thin, flexible silicone were introduced. These significantly reduced the reduction in milk transfer caused by thick latex shields. Also, new research has been done that has shown that shields can be very useful and can even increase milk transfer in certain situations.

Some of the most interesting studies have been done with premature babies. Preemies often have trouble staying attached to the breast due to a weak sucking reflex. They don’t have the strength to maintain the negative pressure that holds the nipple in their mouths, so it tends to slip out after a short time on the breast. Many preemies exhibit immature feeding behaviors, such as short, ineffective bursts of sucking, and have trouble maintaining longer bursts of sucking.

Preemies also have a tendency to fall asleep at the breast almost immediately after beginning a feeding. All of these factors contribute to the fact that premature babies often don’t obtain enough milk by breastfeeding alone, and measures such as stimulating production with a pump or supplementing with formula become necessary.

One recent study showed that babies from 25-37 weeks gestation, and weighing between 2 to 6 pounds when they started breastfeeding, took in much more milk at each feeding when they nursed with a shield than they did without it – nearly 4.5 times more.

The shield seems to help by giving the tiny baby a firmer surface to grasp and hold in his mouth, so he doesn’t “fall off” the nipple when he pauses between sucks. This keeps him on the breast longer, and increases the transfer of milk. Shields also help smaller babies attach effectively to large nipples and to remain attached longer so that they receive more milk. The average amount of time that mothers in the study used the shields was 32.5 days. The mothers used the shield for an average of about 24% of the total time they breastfed. How long they used the shield had no relationship to how long they nursed their babies. Another study suggested that the typical baby will need to use the shield until he is at full-term, corrected age. This means that most preemies will use the shield for several weeks.

Although I understand your desire to get your baby off the shield as soon as possible, there is no medical reason to rush it. It may be that your baby needs the extra help with milk transfer that the shield provides at this time, and just may not be quite ready to “graduate” yet. She may need to get a little stronger, gain a little more weight, and grow her tiny rosebud mouth a little larger before she can handle nursing effectively on your large nipples without some help from the shield. Assuming that she is ready to make the transition to breastfeeding without the shield, here are some techniques you can use to encourage her to take the breast :

I hope that your little girl will soon make the transition from nursing with the shield to nursing without, but regardless of when (or if) that happens, you can feel good about the fact that in spite of the challenges you encountered in the beginning, you are continuing to provide her with the many nutritional, immunological, and psychological benefits of breastfeeding.