Why does my breast milk change colors? 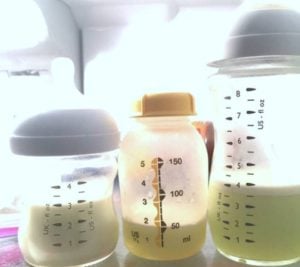 Question:  My milk seems to look different every time I pump. Sometimes it looks thin and watery, and sometimes yellow and creamy. At times it has a bluish or greenish tint. What could be causing that?

Answer : Unlike formula, which always looks the same, the composition and appearance of human milk changes from day to day, from feeding to feeding, and even during the same feeding.  Breast milk may look bluish, greenish, yellowish, or brownish,  according to the percentage of foremilk it contains.  It may look pinkish if it gets small amounts of blood in it, usually from a cracked nipple.

Foremilk expressed at the beginning of a feeding or pumping session may look thinner and bluish, like skim milk. 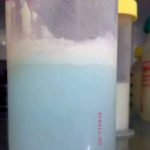 It has less fat and more sugar than milk produced after the milk let’s down. Hindmilk expressed later in the feeding may look thicker or creamier, and have a yellow tint. The yellow tint is especially pronounced during the first week of nursing while the milk still contains colostrum.

One of the many benefits of breastfeeding is that your body produces the perfect milk for your baby depending on what he needs – in warm  weather, the milk  contains more water.  Milk for preemies has a higher fat content because they are growing so quickly. Milk for toddlers is different than milk for newborns, which is why milk banks always try to match the donor’s age to the baby’s as closely as possible. Mother’s milk even contains antibodies to fight specific germs her baby is exposed to and protects him from infection in a very specialized way. Formula is not a living substance. It doesn’t adapt to meet the baby’s individual needs the way breast milk does.

Some mothers have what is called a foremilk/hindmilk imbalance, which means that the baby gets too much foremilk and not enough hindmilk. Usually it’s because the mom has so much milk that as the nurses, the baby gets so much of the sweeter, lower calorie fore milk that he gets too full to take enough of the higher calorie hind milk. This can result in a fussy baby who has frothy greenish stools and doesn’t gain weight well. Find out how to deal with this problem in the article Oversupply: Too Much Milk.

Breast milk isn’t spoiled unless it smells really bad or tastes sour, but sometimes it may smell ‘soapy’ after it is frozen and then thawed. This is due to the breakdown of milk fats that occur during the freezing process. If there is a yucky smell from high lipase (enzyme that breaks down milk fats) activity when the milk has been frozen, it doesn’t mean the milk is bad, or will hurt your baby. Some babies don’t mind the taste, and will drink it anyway. If they balk at the taste, the milk can be heated to scalding (bubbles around the edges, not boiling) after expression, then quickly cooled and frozen. This deactivates the lipase enzyme, gets rid of the taste, and is still better for your baby than formula.

Human milk may separate into layers of milk and cream during storage, just as  cow’s milk will when it isn’t  homogenized.  That doesn’t mean the milk is spoiled. Gently swirl it to mix the fat that has separated. For more detailed information,  see Pumping and Storing Breast Milk.