How long does it take for food to get into my breast milk?

Question:  How long does it take for food I eat to get into my breast milk? If I have chicken, rice and a salad for dinner, then when would I expect to have that show up in my milk? 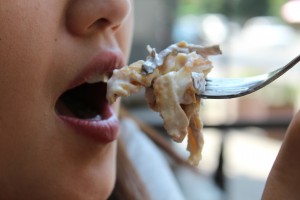 Answer:  I can’t tell you exactly how long it takes for the food you eat to affect your breast milk, because there are so many variables involved, including how often you nurse, the type of food you eat, and your individual body chemistry and metabolism. An average (and this is only an average) is about 4-6 hours, but it can reach your milk as soon as one hour or take as long as 24 hours.

I can tell you that if you are like the vast majority of nursing mothers, then you can eat just about anything you want to while you’re nursing, and it won’t adversely affect your breast milk. It is rare for a food that you eat to cause problems, but if your baby is highly sensitive, he may have an allergic response such as continuing colic, runny eyes, asthma, or stubborn skin rashes.

Babies are not “allergic” to their mother’s milk, but the occasional  highly sensitive baby can have mild to severe reactions to the foreign proteins in the breast milk. Proteins from the foods you can be absorbed into your body from your intestines and passed to the baby via your milk.

During the first six months of life, the lining of the baby’s stomach is immature, so allergens that appear in the breast milk can get into the bloodstream and trigger allergic responses in some extremely sensitive babies. The lining of the intestines is also more sensitive during the early months, and is more easily irritated than it would be later on by the same substances.

After six months, the lining of the intestines matures so that allergens can’t get through as easily, and your baby will be much less sensitive to foods in your diet. That’s one of the reasons that babies should be exclusively breastfed for the first six months of life. If solids are introduced before that time, then the baby is more likely to have an allergic reaction to something that might not affect him later on.

The most common problematic foods are dairy products, eggs, wheat, shellfish, peanuts, corn, and citrus, and (surprisingly), soy.  Rather than worrying about limiting your diet when you’re nursing, go ahead and eat anything you want, and if you have reason to think your baby has a problem, then try eliminating that particular food.  The first thing to try eliminating is always dairy, because the protein in cow’s milk is the most common allergen for babies.  Because of this fact, I recommend that mothers with a family history of allergies try to limit their dairy consumption starting during their pregnancy, and continuing after the baby’s birth, and to delay the introduction of solids until at least six months.

Some mothers who develop yeast infections while they are pregnant or lactating find that they benefit from dietary changes including limiting or eliminating alcohol and foods containing sugar, dairy, and yeast.

Other than these unusual situations, you really don’t need to worry about the foods you eat affecting your baby.  Just enjoy your food, and don’t start stressing about whether that pizza you ate last night is what made your baby spit up today.  All babies have days when they are gassy, fussy, or spit up more than usual, and chances are that it has nothing to do with your diet. Nursing mothers rarely have to make any modifications to their diets.

For more information about diet and breastfeeding, see article Nutrition, Weight Loss, and Exercise While Breastfeeding.

How long does it take for food to get into my breast milk?

There are many variables involved, including how often you nurse, the type of food you eat, and your individual body chemistry and metabolism. On average it takes about 4-6 hours, but it can reach your milk as soon as one hour or take as long as 24 hours.

Ask Anne… My baby is now just over five months old, and I seem to have …