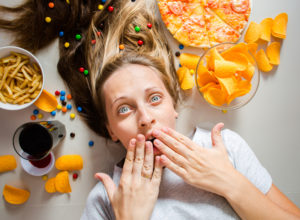 Question: How common is it for babies to be sensitive to what a nursing mom is eating? Also, what is the usual time frame for a baby to get gassy after mom has eaten something “wrong?”

Answer: Substances from the foods you eat can appear in your milk anywhere from 1-24 hours after ingestion, with the average being 4-6 hours, depending on a number of factors. These include the type of food, the amount ingested, your individual metabolism, how often your baby is nursing, etc. The good news is that chances are that you don’t need to worry about it anyway.

The main food known to appear in breast milk and cause problems for babies is the cow’s milk protein in dairy products, and then it’s only in babies who are allergic to dairy already. It is estimated that between 2-7 % of babies have a sensitivity to dairy products. These babies often have a family history of allergies, and they are still much better off on breast milk than on formula. The solution for these sensitive babies is for the mother to reduce or eliminate dairy products rather than switch to formula, because at least half of the babies who are sensitive to cow’s milk are also allergic to soy based formulas. If you have a problem with dairy, for instance, the foreign proteins from cow’s milk present in your own milk can cause problems for your baby. But there’s a good chance your baby will not be sensitive to these foods later in life if the baby is breastfed.

There are no special dietary rules to follow during lactation. If your eating habits are fairly healthy, there is no reason to change them while you are nursing. There are no special foods to avoid, or certain foods that you need to eat in order to produce a plentiful supply of nutritious breast milk. With rare exceptions, nursing mothers can eat pretty much anything they want to eat – including chocolate, broccoli, pizza, and diet soda – in moderation. Some dietitians and lactation experts feel that one advantage to breastfeeding may be that the milk is flavored by the foods the mother eats, so the baby becomes used to a variety of taste sensations, and tends to have fewer feeding problems as he gets older.

You’ve probably heard that eating “gassy” foods like cabbage, beans, or broccoli will make your baby gassy. I believe that this is one of many “old wives tales,” because gas is produced when bacteria in the intestine interact with the intestinal fiber. Neither gas nor fiber can pass into breast  milk, even when you have gas. Although it is possible for a baby to be sensitive to a food in his mother’s diet, he is much more likely to react to a food given to him directly.

I suspect that most mothers who swear that they can’t eat (pizza, Mexican food, broccoli, cabbage, beans, chocolate, etc.) while they are nursing are actually overreacting to their baby’s normal behavior on any given day.

There is a natural tendency for nursing mothers to attribute every little thing their babies do to breastfeeding. ALL babies (whether breast or bottle-fed) have days when they are gassy, fussy, and spit up. Some babies have sensitive digestive systems, and no matter what you feed them, they will experience bouts of intestinal upsets. When you are nursing, you start to think “he’s so gassy today, must be something I ate. Yep, I had pizza for dinner last night – that must be it. I can’t eat pizza from now on.” When taken to extremes, this sort of thinking can lead to a diet of nothing but boiled chicken and rice.

The one thing you can be sure of is that there is nothing you can put into a sensitive infant’s stomach that will be easier to digest than breast milk. The majority of two-week old babies will have a certain amount of gas just because they are newborns and their digestive systems are not very mature. All babies are gassy sometimes, and they all outgrow it. It’s a stage that many babies go through, and gets better with time. If you feel that the gas is excessive and is causing problems, here are some suggestions you may want to try:

For more tips on what to do when your baby fusses, see Calming the Fussy Baby: Is it Colic?

Some studies have shown that simethicone (the active ingredient in Mylicon drops) is no more effective than a placebo in treating colic, even though pediatricians have recommended it for years to relieve gassiness in colicky babies. The medication is harmless, relatively inexpensive, and available over-the-counter, so it may be worth trying – but if it seems to help, it may be due to the placebo effect: the babies improve because the parents think the medicine will work, and not because of the treatment itself.

For more information about how what you eat affects your nursing baby, see Nutrition, Exercise, and Weight Loss While Breastfeeding.