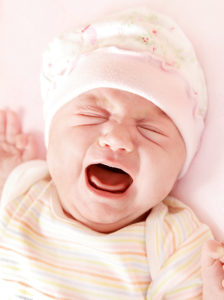 One of the hardest things for new moms to deal with is a cranky, inconsolable baby. There will be times when you have done all the ‘right’ things: feeding, burping, changing her diaper, making sure she’s not too hot or too cold…

And she still isn’t happy.

This will happen more than once. It happens more when your baby is an infant, because tiny babies have no way to communicate other than by body language or crying. It happens more in the evenings, when you and your baby are the most tired, and your milk supply is lowest as well.

So what do you do when you’ve tried everything and she’s still fussy? Here are some things to try…but first, Let me make it clear that I can’t guarantee that any of these things will work. Sometimes babies are just fussy no matter what you do, and you have to wait it out without feeling guilty about what a terrible mom you are.

There are two professional terms you may not be familiar with: “Shh…Shh…Shh…Shh” and “Jiggling”.

“Shh…Shh…Shh…Shh” is the comforting sound that every mother in the world makes. I’ll refer to it as “Shushing” for the sake of brevity.

Jiggling is – well –  jiggling. Holding the baby close and gently moving her up and down. You know,  jiggling. It’s an automatic response when you hold a fussy baby. Motion is very soothing to babies. However, the cradle hold will put her in the nursing position, so if you try to breastfeed her and that’s not what she wants, hold her upright close to you and jiggle instead.

Another important thing is that while none of these techniques work all the time, and some of them don’t work at all at any given time, you often have better luck with them if you combine them. For example, baby wearing outside while shushing, or rocking while listening to music, or swaddling and swinging, often work better in conjunction with other methods than they do alone. When your baby is crying, you’ll do pretty much anything make her stop.

In the first few months of parenting, you are in the survival mode, especially if you have a colicky baby.  Do whatever it takes to calm your fussy baby down. Swings, massage, a warm bath, a pacifier, or a glass of wine for you. Don’t beat yourself up if your baby is fussy and nursing doesn’t calm him down. Babies work in mysterious ways, and this too shall pass.