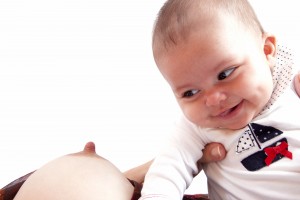 My baby is now just over five months old, and I seem to have reached a bit of a ‘mental hurdle’ where breastfeeding is concerned. She refuses to take bottles, so  it’s been complete hell if I leave her with a sitter – she screams the whole time. Fortunately, now  she will at least take some milk from a cup. She has never taken to the dummy, and  spits it out as if to say “What are you trying to do to me?” She has never sucked her thumb, either.

In short, I have become her “human pacifier”.  Now I worry about my breasts being her only source of comfort. Should I always nurse her to sleep, or try to cuddle and console her in other ways? Will she naturally find other sources of comfort, like a teddy bear or a blanket?

I’m worried about nursing her in public. What if she starts screaming for comfort in the middle of the supermarket?  Also, I  will have to return to work and hate to think of her only source of comfort being my breast.

Answer:   Babies who are going to wean themselves early on will usually start cutting back on feedings around the time they start eating solids and becoming mobile – sometime between six and nine months. Usually these babies are self soothers (they have their thumb, a pacifier, or a security object to use when they want to go to sleep or when they are fussy, sick, or get hurt) so for them, breastfeeding is more of a comfort thing than a way to get food. Once they don’t ‘need’ to breastfeed because of hunger, they often begin to lose interest in nursing.

Babies who aren’t self soothers tend to use the breast for comfort, and they tend to wean later than babies who are attached to pacifiers or security objects.

I can totally relate to what you are going through. My first three babies all weaned themselves by the time they were a year old, and I wasn’t ready for any of them to stop nursing that early. I really wanted to continue nursing my toddlers, but they all lost interest in nursing around the time they started eating lots of solids and became mobile. All three of them ‘discovered’ their thumbs and became attached to security blankets at around three months, in spite of co-sleeping and being totally breastfed on demand. They continued to suck their thumbs anywhere from five to ten years.

With my 4th, 5th, and 6th children, it was a whole different story. They loved to nurse, and since they didn’t develop any attachments to thumbs or security blankets (unlike their older siblings), they used the breast for a pacifier as well as a food source. The three younger children all nursed between 2 1/2 and 5 years, and never took pacifiers or bottles well if at all.

There are advantages to having self-soothers as well as disadvantages. The advantages were that I didn’t have to be “on call” all the time, and they were very easy to get to sleep. Just give them their blanket, and they would pop their thumbs in their mouths and drift right off. The disadvantages were that they were SO dependent on those blankets. I felt like I spent a ridiculous amount of time looking for the darn things. They would turn up in the car or under the bed, and everything came to a screeching halt while I spent hours hunting for them. I finally got smart with the third baby and cut a big blanket into quarters as soon as the attachment became apparent, just so I would have spares.

I never had a baby who was attached to a pacifier, but I know lots of moms who say the same thing about pacifiers. They have to keep up with them constantly, and if the baby drops it during the night, he can’t settle back to sleep without it until someone comes in the room and finds it for him. They have to have spares (if the baby will accept them) or spend a lot of time washing them when they fall on the ground.

In my opinion, there is no way to help a baby become attached to a security object. It either happens or it doesn’t. You can offer pacifiers  or give your baby a special blanket or stuffed animal from day one, but there is no guarantee that a baby will accept them. Some do and some don’t, just as some babies become thumb suckers while others never use their fingers to soothe themselves. I think that chances are that if your baby was going to become attached to a security object, it would have happened by now.

There is really nothing wrong with using the breast as a pacifier. One of the nicest things about breastfeeding is that it is so much more than a milk delivery system – it works when your baby is tired, sick, teething, stressed, frightened, sleepy, etc.,  as well as when he is hungry. It does tie you down some what, but babies really do grow up way too fast, and while you worry now about whether your little one will ever sleep through the night or stop nursing, all too soon you’ll be worrying about watching her get in the car and driving away with a teenage boy. If you think about the 18 years that children spend at home as a big pie chart, then the piece of the pie that represents the time they spend nursing is really a small piece, even if they nurse for several years.  This time of intense need and attachment doesn’t last forever, and she will stop nursing when she’s ready.

Babies in day care adapt quite well to settling to sleep at nap time for a caregiver without nursing. They do much better than you would think with accepting alternate feeding and soothing methods from someone other than you. Babies associate their moms with nursing, but don’t have the same association with caregivers. Her care provider will find ways to soothe her and get her to sleep without nursing, and she will do just fine.

There are lots of way to handle the issue of nursing in public. With older toddlers,  you can begin by setting limits on nursing.  For example, you can say “We’ll nurse when we get home, but not at the mall”. You can also substitute nursing on demand for nursing at your convenience.

This theory also works for security objects (pacifiers or blankets) – “You can’t take your blankie to pre-school, but it will be on your bed waiting for you when you get home”). There is nothing wrong with telling your baby that she can’t nurse while you are standing in line at Target. If she grabbed a piece of candy off the shelf and started to put it in her mouth, you wouldn’t think twice about taking it away from her and telling her “no” even if it meant that she got really mad and pitched a major temper tantrum. You may have to put up with some tears and histrionics when you tell her she can’t nurse in certain situations, but she’ll get over it and I guarantee you she won’t be scarred for life. Sometimes you just have to be firm with toddlers, and demanding to nurse in public can be one of those times.

Will I spoil my baby if I let him nurse for comfort?

One of the nicest things about breastfeeding is that it is so much more than a milk delivery system – it works when your baby is tired, sick, teething, stressed, frightened, sleepy, etc., as well as when he is hungry.