Breastfeeding problems due to flat nipples 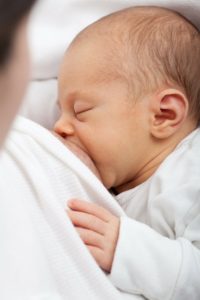 Question: With my first son I successfully nursed until he was 12 months old, at which time he weaned himself. The beginning was very rough and I almost gave up many times. The main problem I had was flat nipples. Neither my doctor or I thought to check before my baby was born.  Now that I am expecting my second child, what can I do to prepare myself before the birth to prevent the breastfeeding problems I had with latch on and soreness due to flat nipples?

Answer: There is nothing you do before your baby’s birth to change the shape of your nipples, but since you know in advance what you are dealing with this time, you should be able to avoid some of the problems you had with your first baby.

How much difficulty a flat nipple presents to a nursing baby depends on the size and shape of the nipple, as well as the baby himself. If you have a strong, healthy, full-term, vigorous nurser, he may be able to draw out the nipple and latch on effectively without much trouble, even if it is flat. If your baby comes early, is small, or very sleepy, he may have more problems nursing. The size of the nipple is also a factor. Large flat nipples are usually more difficult for a newborn to latch on to than smaller nipples.  Once again, a larger, stronger baby will probably be able to handle large, flat nipples better than smaller ones.

Find out if there is a lactation consultant on staff at the hospital where you plan to deliver, and request a consultation with her as soon as possible after the birth. The initial feedings are the most difficult, and having help from the beginning will make a difference..

There are lots of techniques that are useful in dealing with flat nipples. These include:

If you try the techniques listed above and your baby is still having trouble latching on, then using a nipple shield may help. The nipple shield is a thin, flexible silicone nipple with holes in the end that fits over your nipple during feedings. With the shield in place, the baby has a firm surface to latch on to, and sometimes this can make nursing much easier during the early stages of breastfeeding while his mouth is so little, especially if the nipple is so flat that he has a hard time grasping it and drawing it into his mouth.

Nipple shields got a very bad reputation years ago when they were made out of thick rubber, and caused a significant decrease in the mother’s milk supply. They were handed out routinely to new mothers in order to ‘reduce nipple soreness‘ or to get babies to nurse at the breast without trying other options. Under these circumstances, they created more problems than they solved. The new shields are made of very thin silicone, and cause fewer problems with decrease in supply and nipple confusion.

Babies can develop a preference for nursing with the shield, so mothers who use nipple shields should be instructed on how to wean the baby off it as soon as possible, and should weigh their baby frequently to assure adequate milk intake. Nipple shields should only be used when a lactation consultant recommends and supervises their use, and only after other options have been tried. I have seen lots of mothers with flat nipples who had great results with the shield, and all of them were able to discontinue using it after a short period of time. It’s certainly an option to consider if you have problems nursing this time around.

The article Flat and Inverted Nipples has more detailed information.

Ask Anne… Question: I  have larger than average nipples and my baby girl is tiny. …