Do breastfeeding babies need to burp? 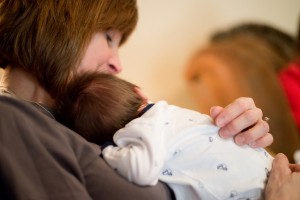 Question:  My baby is three days old, and my milk is really coming in. He is nursing well, and I know he’s getting enough milk because he has already gained two ounces and is having lots of wet and poopy diapers.

The only problem I’m having is with burping. I try to burp him after every feeding, but I’m not having any luck. He just won’t burp no matter what I do!

Do breastfeeding babies need to burp?

Answer:  Yes and no, depending on several factors. Regardless of how they are fed, all babies occasionally need some help bringing up extra air they swallow during feedings, especially when they are newborns. Tiny babies tend to gulp greedily when they eat, and this can result in extra air in their tummies.

However, nursing babies don’t need to be burped as often as formula fed babies because the mechanics of breast and bottle feeding are different.

Babies drinking from bottles swallow more air than they do at the breast. The nursing baby regulates how quickly the milk flows by adjusting his sucking patterns. Bottle fed babies don’t have nearly as much control over the feeding because milk flows from a bottle based on the size of the hole. Breastfeeding babies also tend to feed more frequently and take in smaller amounts per feeding than bottle fed babies, which can reduce the amount of air they swallow. Nursing babies are held in a more upright position than bottle fed babies, and this also means that less air is swallowed.

Babies of moms who have overabundant milk supplies tend to swallow more air because the let down reflex tends to be stronger, and they may gulp air as they swallow quickly to handle the increased flow of milk. They are often fussy at the breast and may pull off during let-down. Babies whose moms have oversupply issues may spit up more often than moms who have average milk supplies, so smaller feedings and more frequent burping may help.

Breastfed babies who eat a lot at one time are more likely to swallow air than they do after small smack type feedings, so it’s worth trying to bring up a burp after a big meal. They are less likely to swallow air during night time feedings because they are more relaxed and tend to nurse more slowly at night than during the day.

Many nursing moms find that burping the baby when they change sides during a feeding. The air that comes out can make room in his tummy for more, and may keep him from spitting up large amounts of milk.

To burp a baby effectively, the baby should be held in an upright position while gentle pressure is applied to his tummy. Burping positions include over the shoulder, in the lap, and under the arm.

Older babies are generally more efficient at coordinating their sucking and swallowing, and are less likely to swallow air as they nurse, so burping is more common in the newborn period.  Burping becomes much less frequent after the first few months.

It’s interesting to note that burping wasn’t a common practice until of bottle feeding became the norm. Babies in cultures where breastfeeding is prevalent don’t swallow enough air to need burping after every feeding. In most cases, burping isn’t necessary with breastfeeding babies. As long as your baby is healthy and happy, I wouldn’t worry about it.

Ask Anne… My baby is now just over five months old, and I seem to have …