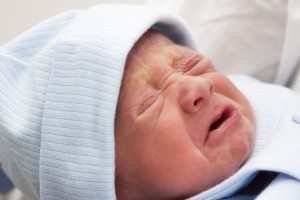 Mothers are often told that their fussy or gassy babies are ‘lactose intolerant’, but this is rarely the case. Lactose intolerance has become a catch all label for any baby who is fussy, or gassy, or has any kind of intestinal upset.

Formula companies love to use this label to their advantage, with ads for products like “Similac Sensitive®: For fussiness and gas due to lactose sensitivity. Most babies are fussy and gassy at times. But if it seems your baby has more frequent fussiness and gas, it could be a sign that he might need another baby formula. You can trust Similac Sensitive to provide a strong start for your babies developing digestive system.”

Actually, you can’t trust the formula companies to give good advice about breastfeeding, because it works to their advantage for mothers to use formula instead of breast milk. Would you go to a tobacco company for advice on how to quite smoking? Probably not.

Many newborn babies spit up and have a lot of gas simply because their digestive systems are immature, and they are just beginning to making the transition from the womb (where they receive nutrients 24/7 via the placenta), to digesting milk.

Starting off with small amounts of colostrum eases the newborn infant’s digestive systems into taking in larger amounts of breast milk. After their milk ‘comes in’, nursing mothers produce transitional milk (a mixture of colostrum and milk), and then mature milk, 7-10 days after birth.

Even though breast milk is much easier to digest than formula, some spitting up, fussiness, and gas are to be expected in all newborns, regardless of whether they are breastfed or formula fed. Many nursing moms worry about the fact that their baby has such frequent, runny stools, but this is normal for exclusively breast fed infants.

There are other conditions besides immature digestive systems that may cause spitting up and gas, including reflux, supplements like fluoride or iron, and gastrointestinal illnesses (stomach flu).

Mothers of fussy babies go to their doctor for answers on how to make the gas or spitting up go away, and in the majority of cases, they just can’t give you any easy answers. Doctors absolutely hate to get questions from new parents about gassiness, spitting up, and colic. That’s because for the most part, they have no idea exactly what causes these symptoms or how to treat them. Having an unhappy baby is traumatic for parents, especially if they feel that there is nothing they can do to “make it better”.

With time, the majority of babies digestive systems mature on their own and they outgrow the symptoms – some sooner than others, but most by three or four months. Of course, when your baby is uncomfortable or in pain, even a few minutes seems like an eternity.

Here’s what you need to know about breastfeeding and lactose intolerance:

To find out more about how to handle the problems that can occur when you have too much milk, see the article ‘Oversupply: Too Much Breast Milk’.

Lactose intolerance is a term that is widely used to encourage breastfeeding mothers to switch to formula, but in reality, very few babies are truly ‘lactose intolerant’.

Think carefully before switching your baby to formula when you’re told he is ‘lactose intolerant’. Formula companies are quick to play on mother’s fears by convincing them that their products are better for babies. Remember, it’s in their best interest to discourage breastfeeding and promote their products.

I was grocery shopping the other day and saw a can of very expensive formula. When checking the label, it said that it was ‘inspired by breast milk’.

This tells you something right there.

Let the buyer beware, especially when it comes to a decision that will deprive your baby of the many well documented benefits of breastfeeding.