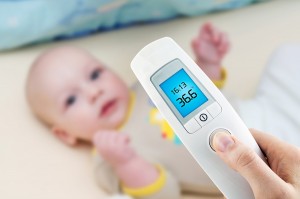 Question: My six month old baby has the stomach flu. Her doctor says she needs to stop breastfeeding and drink Gatorade or Pedialyte until the nausea and diarrhea stop. The problem is that she wants to nurse even more now than she did before she got sick. She doesn’t understand why she can’t nurse to sleep like she usually does.  She doesn’t like the bottle and spits the nipple out. She’s so miserable. I want to nurse her, but I’m afraid it will make her even sicker.  Do sick breastfeeding babies need Pedialyte when they have the flu?

Answer:  Babies often get the stomach flu (viral gastroenteritis), especially in the winter months. It’s very common, and extremely contagious. It’s caused by a virus, so it can’t be treated with antibiotics that will get rid of the infection faster. It just has to run its course, but usually the worst is over in 24-48 hours.

In babies and young children, the biggest concern is dehydration. The main symptoms of the stomach flu are vomiting and diarrhea, and both can cause the baby to lose fluids faster than her body can replenish them. The fluids lost through vomiting and diarrhea need to be replaced, and that’s why sick babies need lots of fluids.

Plain water doesn’t give the baby the nutrients or electrolytes she needs, and may not be absorbed well when your baby has diarrhea.  Sports drinks like Gatorade aren’t designed for babies. They contain too much sugar, and can actually make the diarrhea worse instead of better.

Formula fed babies who are vomiting and have diarrhea are constantly losing large amounts of fluids and electrolytes. Doctors recommend that formula fed babies eliminate all milk products in their diet for 24 hours and give Pedialyte instead as a replacement for the lost nutrients. They often recommend that these babies be given a soy based formula for 24 hours before they start back on dairy based formula.

These guidelines don’t apply to breastfed babies. Breastmilk is closer to a clear fluid than either dairy or soy based formula. It not only provides your baby with the immune factors unique to human milk, but it also is digested so quickly that even if your baby spits it right back up or poops it out, some of it is digested first.

Pedialyte contains the eloctrolytes that need to be replaced, but they are still not as good for your baby as your breast milk.  If a nursing baby gets an intestinal virus, she should continue nursing. She may need to nurse more often and for shorter periods of time, but she should not wean, even temporarily. One of many benefits of breastfeeding is that there is no better way to make a sick baby or toddler feel better than by comforting them at your breast.

Keep in mind that:

Bottom line is that if your baby is able to take any fluids by mouth, she should be receiving breast milk. If she is too sick to take fluids by mouth, and can’t keep down some of her mother’s milk, then she needs to be seen by a doctor because she may need IV antibiotics.

Nurse her as often as possible – the more often the better. Tuck her in bed with you so she can feel you close by, and nurse her during the night. Small  frequent feedings will help keep her hydrated better than any bottled drinks can, while giving her the comfort of breastfeeding that she needs when she’s feeling so bad.  Many babies will nurse readily, while they reject a bottle. Breast milk popsicles are a great way to get fluids in her diet, and many older babies love the way they taste!

Watch her closely for signs of dehydration, which  include:

Call your doctor if your ‘mommy alarm’ is going off and you feel that something just isn’t right. Nobody knows your baby better than you, and it’s always better to be on the safe side when it comes to your baby’s health.

In the meantime, nurse, nurse, nurse! Your baby will feel better, recover from the virus sooner, and have the comfort of nursing at a time when he’s feeling so miserable.