Why does my frozen breast milk smell bad? 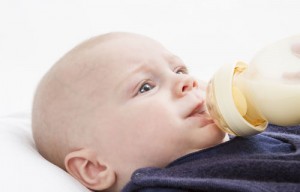 Question: My baby is 3 months old and I’m getting ready to return to work in a few days. I’ve been pumping every day for over a month to build up a freezer stash.  I introduced a bottle of expressed milk when he was 6 weeks old, and he’s always taken it with no problem.

Here’s what I’m worried about:  I defrosted a 6 ounce bottle today and he refused to drink it at all. I smelled it to see if something was wrong with it, and it smelled terrible.

I tasted a few drops, and it tasted bad, too – kind of soapy and sour.

No wonder he wouldn’t take the bottle!

I decided to check my other bottles, and discovered that they all smelled and tasted the same way.

What could be causing this? Is it something in my diet? Is all my milk spoiled? Please tell me I don’t have to throw away a freezer full of breast milk. I have 40 bags saved!

Answer: It’s probably not your diet.  Breast milk is a living fluid that constantly adapts to meet a baby’s needs. Food from the mom’s diet causes subtle changes in flavor of her milk, as opposed to formula, which always tastes the same. Research has shown that mother’s diet during breastfeeding increases her baby’s acceptance of a wider range of flavors when he starts eating solids.

Human milk that has truly soured has a very distinct taste and odor – much like spoiled cow’s milk. If you’re not sure if the milk is still good, just give it a sniff. If it smells spoiled, then don’t give it to your baby. It won’t hurt him anymore than drinking buttermilk or eating sour cream would, but he probably won’t like the taste.

Because of all the live cells and antibodies found in human milk, it doesn’t spoil nearly as easily as formula. It will stay fresh in the fridge for a week or more, while formula will only keep for a day or two.

Freezing milk changes the taste of the milk somewhat, but not significantly. Most babies will accept thawed frozen milk just a well as they do milk that’s freshly pumped.

However, there are some situations where frozen or refrigerated milk smells and tastes bad, even when all the recommended storage guidelines have been followed.

Lipase is a beneficial digestive enzyme found in all breast milk whose function is to break down fat and help digest the milk. Lipase activity increases as the milk gets cold. This means that while the baby is nursing, the milk is fine because the temperature is constantly warm.  However, once it is expressed, excessive lipase activity begins immediately – as soon as the milk starts getting cooler than body temperature.  We don’t know why some moms milk contains higher levels of lipase than others, but moms who have this issue with one baby will usually experience it with others.

The high lipase milk itself is not “bad” – the nutritional value is unchanged, and it won’t make your baby sick to drink it – but it may have such a yucky sour or soapy taste that the baby fusses and refuses to take the bottle at all.

The bad news is that once the excess lipase is activated, there is no way to change the taste. The only options for a freezer full of smelly milk are tossing it (nooooo!!!!!!); mixing it with other milk or baby food to see if that disguises the taste; or donating to a milk bank. Due to the way donor milk is handled, the lipase content isn’t an issue. For more information about donating milk, visit The Human Milk Bank Association.

The good news is that you can still pump and freeze your milk, even if it contains excess lipase. Heat decreases and deactivates the activity of lipase and gets rid of the soapy taste. Scald the expressed milk by bringing it close to a boil -until bubbles form around the edges- then then cool and freeze it. Freezing the milk will slow down the lipase, but scalding stops it completely.

Ordinarily, breast milk should not be boiled or excessively heated, because some (but not all) of the antibodies and live cells in the milk are destroyed by heat.  Human milk banks routinely heat and pasteurize donated milk, and the heated milk is still far superior to formula, which doesn’t have any immune factors to begin with.

Remember that excess lipase activity makes breast milk smell and taste funny, but doesn’t affect the nutritional quality at all. Heat treating the milk before freezing is a real pain, but the many benefits of human milk for your baby make it well worth the effort.

Here’s a blog with more detailed information about breast milk and lipase:  How to Scald Breast Milk with Excess Lipase Activity

Ask Anne… Question: I successfully nursed my first baby. I am now expecting my second …