What can I do about my 7 month old who isn’t gaining weight well? 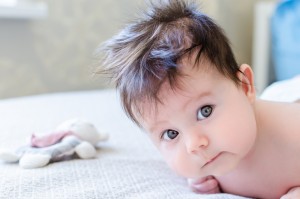 Question: My son is seven months old and I breastfeed him. I have also started solid foods. He only gained 5 ounces last month, and his doctor has said that she is getting concerned about whether I have enough breast milk. He usually nurses 4-6 times a day and he eats cereal and a fruit or veggie twice a day.

When he nurses he seems content and goes for a couple of hours before he wants to eat again. How can I tell if he is getting enough from me? Should I supplement him with formula? Should I give him more solid food? I am so confused and getting worried.

Answer:  First of all, I would be interested in knowing your baby’s birth weight and pattern of weight gain over the past seven months. If he has gained weight appropriately and has had good urine and stool output up to this point, then chances are that he is following a pattern that is normal for him and there is probably no reason for concern. If you had a milk supply issue, it probably would have shown up way before now.

Average weight gain for the first three months is 4-8 ounces per week. During the second six months, it averages 3-5 ounces per week, and from six to twelve months it drops to  1 and 1/2 – 3 ounces per week. Most babies will double their birth weight by 5-6 months, and increase it by two and a half to three times by one year.

Keep in mind that all these guidelines only apply  to the mythical “average” baby, who doesn’t really exist in real life. There will always be perfectly normal babies who are at the 10th percentile or at the 90th.

Weight gain is only one measurement of growth, but sometimes doctors tend to focus on the weight charts alone .  Many doctors still use outdated charts that are based on formula fed babies. These charts have been revised  because there are differences in growth patterns between breastfed and formula fed babies, especially after the first three months.

From the 4th to the 12th month, nursing babies gain more slowly (even after solids) and are leaner at one year. Breastfed babies consume 20% less milk than their formula-fed counterparts during this time, and their growth is perfectly normal.

Overall development should also be evaluated. Is the baby happy and developmentally on target?

All of these factors need to be considered when evaluating your baby’s growth, not just how many ounces he gained in a given month.

I have had two babies out of six who didn’t gain weight the way all the charts said that they should. They both started out at the 95th percentile and ended up at the 10th. I tried everything to get them to eat, and they still stayed on the low, low end of the charts. They are both fine now, and  one is extremely thin and can eat anything without gaining weight, and the other is average weight.  I think they were just genetically “programmed” to be skinny when they were younger, and as they grew older they settled into the weight pattern they were designed for. When they were babies I worried myself sick about their weight gain and tried my best to force feed them, but I never had much luck with that.

In my experience, a healthy baby who is offered breast milk on demand, as well as a variety of nutritious foods is going to be just fine. He may not follow the pattern of the “average” baby exactly, but you have to remember that the average baby simply doesn’t exist in real life.

Of course there are situations where slow or low weight gain is a genuine concern. The baby who  loses weight, or stops gaining weight completely; the baby who is always fussy or lethargic; the baby who is lagging behind in mental or motor development; or the baby whose head circumference is not increasing is a baby who may have medical problems that need to be investigated and treated appropriately. This is very different from the much more common scenario of a happy, healthy baby who is contented and is gaining weight on a slow curve.

There are lots of things you can try to increase your supply. If you do need to supplement with bottles, I would suggest giving more milk rather than solids. The best supplement would be your pumped breast milk, the second choice would be donor milk, and the third would be formula.

Breast milk and formula contain about twenty calories per ounce, and cereal contains about fifteen. What actually happens is that an ounce of cereal with less caloric density than milk is taking up space in the baby’s stomach that would best be taken up by milk or formula.

Since human milk is the most nutrient dense food you can give your baby, solids should be started slowly and not over-emphasized in the first year when the baby is still growing so quickly. Cereal doesn’t contain the fat, protein, and calories that babies need during this critical period. That doesn’t mean that it is bad for him, but he shouldn’t fill up on it.

You need to be aware of the possibility that even if you offer him supplemental feedings, he still may not gain weight like the “average” baby. I never found that I could get my slow weight-gaining babies to eat more no matter what I tried to feed them. I made sure that what I offered them was nutritious food (not empty fillers), and they found their own niche on the weight charts and stayed there. It may be a good idea to try offering him supplemental feedings just to see if he will take them, but don’t be surprised if he isn’t too enthusiastic about them. On the other hand, he may gobble them up and then everyone will be happy, including his doctor.

I hope that this has given you some information that will be helpful. You most definitely need to continue nursing, because even if you do end up supplementing, any amount of breast milk that he receives is valuable – and of course, the closeness that you share with him is priceless.

Here is the link for the Revised Growth Charts, based on breastfed baby’s growth patterns. If your doctor isn’t using the revised charts, share this link with him. It’s a much more accurate way of measuring your baby’s growth, and every health care provider needs to be using the newer info.