How much milk does my baby need while I’m at work? 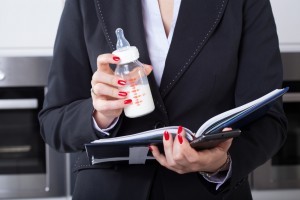 Question:  I have recently returned to work and am concerned about the amount I’m pumping and how much my daughter should be taking in at each feeding. She was 7 lbs 4 oz at birth. At her two-month check-up she weighed 9 lbs 8 oz. She is three months old now and she weighs about 10 pounds. I  pump 3 times a day at work and get about 3 ounces each time (a total of 9 ounces each day). Her caregiver has been giving her the 3 ounce bottles from the previous day of pumping. She seems to be doing fine, but I have read that at her age and weight she should be taking in between 4-6 ounces at each feeding. Is she getting enough breast milk?

Answer: Congratulations on continuing to breastfeed your baby after returning to work! It’s a real labor of love and presents many challenges, but is well worth the effort.

Based on what you’ve told me, it sounds like your baby may need more milk than she is getting at this point.  Her weight gain was excellent up until the past few weeks, and it is kind of unusual for her to change her pattern of weight gain after gaining so quickly in the beginning.  Has she had a cold or any kind of illness? Sometimes that can slow down baby’s weight gain temporarily. Many mothers find it a challenge to maintain their milk supply once they return to work because their breasts don’t get as much stimulation as they do when they’re at home feeding on demand.

Most babies will gain four to eight ounces a week during the first few months, so if she only gained eight ounces in the past month, I would encourage you to try feeding her more and taking steps to build your milk supply.

The average baby who isn’t eating anything but milk needs about two and a half ounces per pound of weight. Some babies need more, some need less in order to gain weight adequately. A ten-pound baby needs about twenty-five ounces in twenty-four hours (round up a few ounces to be on the safe side – say twenty-eight ounces), which means that if she eats eight times in 24 hours, she would need a little over three ounces at each feeding. Usually babies this age will take in over three ounces, because ideally they would weigh more than ten pounds at this point.

Your best guide as far as how much milk to offer her is weight gain. If she is gaining 4-8 ounces a week and seems contented after feedings, then she is getting enough to eat. On the other hand, some laid back babies may seem satisfied even if they aren’t taking in the volume of milk they need, so weight gain is the best indicator that they are getting enough milk.

I would suggest that you offer her an extra 1/2 to 1 ounce  of milk at each feeding, and see if she takes it. Breast milk is always the best supplemental food, but if you can’t increase your milk production, then I would offer breast milk first, and follow it up with formula. If you mix the two together, then you may waste some of your milk if she doesn’t finish the bottle.

If she takes the supplemental feedings and her weight is still on the low side, and she is developing normally, then she may just be a baby who is going to be thin. Not all babies can be at the 90th percentile, and lots of perfectly normal babies are at the 10th.

It sounds like you are pumping as often as you can at work. Your options for increasing your milk output include nursing or pumping more often (which may not be realistic for you), supplementing with formula, using techniques to facilitate let-down (like breast compression, massage, or relaxation exercises), or trying some herbal remedies for low milk supply. Herbs like Fenugreek or blessed thistle may help some, but probably won’t make a dramatic difference.

The articles Increasing Your Milk Supply and Pumping and Storing Breast milk  may have some helpful suggestions for you.