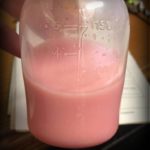 Question:  I  delivered my baby girl three days ago. My breast milk came in yesterday, and today I pumped for the first time because my breasts were so full. When I pumped, there was blood in the milk and it looked pink.  I don’t know what’s  wrong, and I’m afraid to feed the milk to my baby. Help!

Answer: Although finding blood in expressed breast milk is a frightening experience,  you can be assured that it’s not uncommon, especially in mothers who are nursing their first baby.

There are several medical conditions that can cause blood to appear in a mother’s milk. They are all relatively common, they end quickly, and are rarely serious.

The most common cause of blood appearing in the breast milk is a damaged nipple. If the nipple is abraded, or has open blisters or cuts, then the tissue will bleed when it undergoes stress (for example, a healthy baby sucking vigorously).  Sore nipples can be caused by thrush, mastitis, or latching problems.

A small amount of blood will appear when pumping, or it may show up in the baby’s spit up or bowel movements. Once the sore area of the nipple has healed, the bleeding will stop. Swallowing a small amount of his mother’s blood will not harm the baby in any way. After all, mom and baby shared a blood supply for nine months before birth! For more information about sore nipples and how to treat them, see Sore Nipples.

Another cause of blood in the breast milk is “vascular engorgement”, also called “Rusty Pipe Syndrome”.  This condition typically occurs in a first time mother, most often occurs in both breasts (but may occur in one breast first), and also been noted in dairy cows.  Rusty Pipe Syndrome occurs due to the increased blood flow to the breast, in combination with the rapid development of milk producing tissue in the expectant mother. There is no medical treatment for this condition, but it usually clears up within a week after birth, and doesn’t reoccur after that.

Other less common causes of blood in the breast milk include fibrocystic breast disease, intraductal papillomas (a benign tumor in a milk duct which usually can’t be felt as a lump, typically occurs in only one breast, and usually stops spontaneously without any treatment), or broken blood vessels due to trauma to the breast (including hand expression involving rough treatment of the breast or nipple tissue, or improper use of a breast pump).

According to one study based on premature babies, pink milk may be due to a bacteria called Serratia marcescens.  It’s the same bacteria that causes pink stains on toilets or sinks. It’s commonly found and rarely dangerous, but anytime you are pumping for a preemie, you need to be especially careful about cleaning pump parts to keep bacteria from growing. If you’re pumping for a preemie and see blood in your milk, it’s a good idea to check with your baby’s doctor before you feed it to your baby.

In most cases involving blood in breast milk, there is no treatment except time. There is usually not much pain involved, unless the nipples are raw and abraded, or the breast tissue is extremely tender due to engorgement. Given the facts that  these conditions are almost always self-limiting, there is no treatment for them, and the small amount of blood ingested is not harmful to the baby, the usual recommendation is to continue breastfeeding and/or pumping and wait for the bleeding to stop. If the bleeding is accompanied by pain, or hasn’t stopped within a week after birth, or if you are pumping for a premature baby, then you should consult your physician and/or lactation consultant in order to establish what the cause is and how to deal with it.

Congratulations on your new arrival! Seeing blood in her breast milk is one of the scariest experiences a nursing mother can have, but it usually disappears within a few days and doesn’t happen again. Try to hang in there – the first couple of weeks of breastfeeding are definitely the most challenging, but the long term benefits  are well worth the effort.