What should I do when my baby bites? 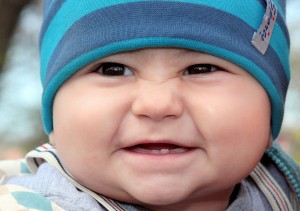 Question: My son recently got his first three teeth and has done a number on my nipples. It seems he is more likely to bite down when upset or just really tired. What is the best way to deal with this problem?

Answer: Many new mothers tell me that they plan to nurse their babies for six months, or until they get teeth. With the American Academy of Pediatrics  now recommending nursing for at least a year, it makes sense to re-examine our ideas about breastfeeding babies with teeth. I have had two babies out of six who got teeth at four months, so if I had weaned them at that stage, they wouldn’t have been able to nurse for long at all.  And yes, I have been bitten a few times.

The most memorable time was right in the middle of a breastfeeding class. I was trying to get my squirmy seven month old to settle down and be still while I was teaching, and I absentmindedly tried to get him to nurse without really looking at him. Apparently he decided that he wasn’t getting nearly enough attention, and besides, he didn’t really want to nurse right then. He chomped down hard and I jumped about three feet off the chair. The mothers in the class got to see a vivid visual demonstration of biting, and I never tried to nurse him without paying attention to his signals again. He went on to nurse for years and never bit me again.

Many babies never ever bite at all, and most who try it once or twice usually respond to your startled reaction by never doing it again. Biting can cause soreness or even nipple damage. We’re talking about a very sensitive portion of your anatomy here,  so getting bitten even once is one time too many! However, biting is rarely more than a very short-term problem, and I can honestly say that in 35 years of working with nursing moms, I have never known of a single case of a baby actually biting a nipple off completely. Now, don’t you feel better about the whole thing?

With some babies, it is a little harder to break the biting habit, but all babies, no matter how old, can learn not to bite. A baby who is latched on and nursing properly cannot bite the breast. If the nipple is positioned far back in his mouth, and his lips and gums are positioned about an inch behind the nipple on the areola, then his tongue will cover his gums, between his lower teeth and your breast. If he is actively nursing, he can’t bite and if he is biting, he can’t be actively nursing at the same time.

Most babies bite because they are frustrated: their gums hurt, they are tired and fighting sleep, they’re bored, or they are upset about something. They also bite because they think it’s a funny thing to do – they’ll chomp down and then grin at you. They think they’re playing a new game, and get their little feelings hurt when you make it clear that you don’t find it all all amusing.

Here are some tips on how to prevent biting:

2)  Stop the feeding immediately if he bites you. Even a very young infant can learn that if he wants to nurse, he can’t bite. If he is teething, offer him something to teethe on, such a teething toy, a cold washcloth, a frozen bagel or banana (if he is eating solids), a breast milk popsicle or a knuckle (my baby’s favorite). If he tends to bite at the beginning of a feeding, offer him a teething substitute before the feeding. Very young babies can learn that some things are appropriate to bite down on, but your nipple isn’t one of them.

3)  If your baby continues to bite, try telling him in a firm voice,” No, that hurts Mommy!” and then put him down. He won’t like it, but he will quickly learn that if he wants to nurse, he can’t bite. Be sure to comfort him after a few seconds, but don’t continue to let him nurse if he bites. Hopefully this will be a very temporary stage for you and your baby. For more information, see article Teething and Biting.

When we hear the term “tongue-tie”, most of us have a mental image of someone …