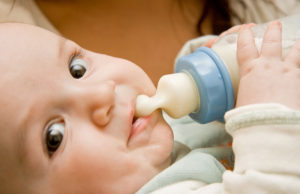 Question:  I have a six month old baby that, due to personal reasons, I need to wean. She is definitely NOT a self soother as she doesn’t take a bottle or a pacifier. We have been trying for about a week to give her a bit of formula instead of the breast but it seems to be a “no go”. We’ve even tried soy based milk thinking she would enjoy the taste a bit better. I know you’re going to say that I should try giving her  breast milk in the bottle but that has also been done. She just plainly hates the bottle.

As you can see, I really need help with a strong-willed child. I’m about to go crazy here. I’m getting married in 4 weeks, I can’t put her down, she can’t entertain herself, and I can’t begin to wean! HELP!!!!
*weaksmiles*

Answer:  Getting an older baby to take a bottle can be challenging. Babies get pretty set in their ways after the early weeks of nursing, and may decide that milk is supposed to come out of breasts, not bottles, and they just won’t accept a substitute for the real thing.

IMO, all formulas taste pretty nasty compared to breast milk, especially the soy formulas. Have you ever tried soy milk vs powdered milk vs regular cow’s milk? They may all have the same number of calories, same amount of protein/calcium, etc, but anyone who tells you they all taste the same is lying.

The article Introducing Bottles and Pacifiers to a Breastfed Baby has some tips on getting her to take a bottle, but at this age, you might have more luck at offering her a cup. Many babies this age are very interested in cup feeding, and are more likely to accept it than a bottle because they associate sucking with breastfeeding, but not cup feeding. I would try offering her  breast milk in a cup, and if she refuses that too, I would try offering her juice in a cup. Some babies will accept juice but not milk, and if she will, then you can try adding a tiny bit of milk to the juice (maybe 1 tsp to an ounce of juice) and then gradually increase the amount of milk until she learns to accept the taste.

A six month old baby should be ready to eat solid foods, and can get some of the protein and calcium that milk provides in other dairy products, like yogurt and cheese. It doesn’t all have to be from drinking milk.

You didn’t say why you feel that you have to wean so quickly, and I’m not going to ask. I’ll just say that there are lots of benefits to nursing for at least the first year, and you might want to look into options that would allow you to keep providing your baby with at least some of your milk, like exclusive pumping, or combining breast and bottle, or taking an alternative medication if you’ve been told to wean because of a drug you need to take not being safe during lactation.
Weaning a baby this age who is not a self-soother is not going to be easy, but it can be done. With time and patience, I’m sure you’ll get her to accept supplemental feedings of milk one way or the other.

Be sure to give her lots and lots of extra cuddling and physical contact after she stops nursing. Babywearing can be a lifesaver.

Best of luck with weaning and with your wedding!

Ask Anne… Question: I successfully nursed my first baby. I am now expecting my second …