I Embraced Our Version of Breastfeeding by guest blogger Tricia 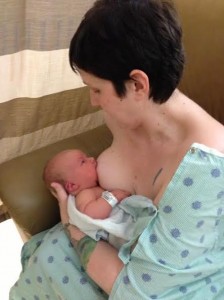 I had a breast reduction in my early twenties. The doctor who performed it told me that they were mostly fat and had very little glandular tissue (IGT). He assured me I could breastfeed one day and I assumed he knew what he was talking about.

When I had my first baby, Forest, I tried everything I could to breastfeed him, but I didn’t produce much milk at all and quit after 5 weeks.

I became pregnant with my second baby, Jude, 5 years later. This time I prepared myself to make as much milk as I could. I bought a Lact-Aid system to supplement with and read several books. I wasn’t going to let low supply stop me this time. My midwife insisted I not supplement right away and give my body a chance to meet my baby’s needs.

Jude was born quickly and had fluid in his lungs. We got to breastfeed once after his birth. He ate like a champ and it was clear that he would be a booby monster. Then he turned blue and was whisked away to the NICU and put in an isolette with breathing and feeding tubes. I couldn’t hold him, let alone feed him, for days. I pumped and pumped to get him every drop of colostrum. I hadn’t expected to make much, but when my midwife held up the bottle with 7 mls of colostrum and commented about how little it was, I felt defeated. I couldn’t give up, though. Jude needed those measly drops. I moved into the care by parent room and pumped constantly. On the third day my milk came in, and Jude came out of the isolette. I could finally hold and feed him. He had trouble latching with the SNS (Supplemental Nursing System), and though I had said no bottles, I was tired and gave in so that I could just bring my baby home.

I tried using the Lact-Aid, but each time it would result in a nursing strike and I gave up on it. I started taking herbal supplements and eating any lactogenic food I could find. We spent weeks going through the nurse, bottle, pump routine. When Jude was 4 weeks old my father died. I gave up pumping; I just couldn’t handle it anymore at that time.

My booby monster quickly started showing a preference for the bottles. The nursing became harder and harder and at 11 weeks I tried the Lact-Aid one last time. It worked! He took it happily and hasn’t had a single bottle since he was 13 weeks old. He became my booby monster again, and started nursing every single hour. I thought it was a growth spurt, but it still hasn’t ended. 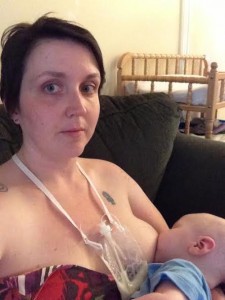 At the same time, I noticed that he was having trouble maintaining suction with the tube in his mouth and realized he had lip and tongue-ties. I spent several weeks arguing with several doctors about fixing them. I finally got an appointment with Dr. Jack Newman. It was a 5 hour drive each way with a 4.5 month old who ate hourly, but it was worth it to me. With the improved latch, I thought there was a chance to increase my supply and wean off the Lact-Aid. I started taking Domperidone. I gained 45 lbs on it, but the increase in supply was negligible, and Jude began to refuse to nurse without the SNS anyway. I gave up on the dream of feeding without supplementation and embraced our version of breastfeeding.

Since then we’ve battled months of recurring plugged ducts and a case of thrush that just won’t go away. Jude still eats every 1-3 hours at night. I use the Lact-Aid for night feedings, and I can’t doze through them like a normal breastfeeding mum. If Jude falls asleep before he finishes the supplement, it will continue to drip into the bed and we will wake in a huge puddle of formula. Nights are the only time I really curse my low supply anymore.

Jude is turning 1 in just two weeks and he still wants to breastfeed constantly, but I can’t complain. I love it, and so does he. I’m so glad that I stuck it out through all of the troubles, because this relationship is so unbelievably special to us both. It was worth it and I would do it again in a heartbeat. If you really want to breastfeed your baby, don’t let obstacles stand in your way. I am proof that they can be overcome. You may have to change your expectations, though.

Parenting is hard no matter how you slice it, but sometimes we do things without …