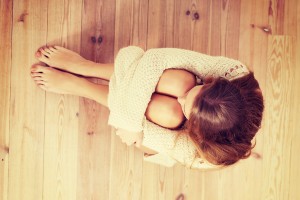 Many mothers suffer from postpartum depression (PPD) after they give birth. It most often occurs during the early weeks or months, but it can show up anytime during the first year. First time moms are more likely to experience PPD.

No one knows exactly what causes it, or why some women get depressed and other don’t. We do know that it’s a fairly common condition, affecting the majority of new moms to one degree or another.  Stress, anxiety, and hormonal factors all play a role.

Breastfeeding mothers generally  have less PPD than formula feeding mothers, because nursing your baby can lower your stress level overall, encourage bonding with the new little person in your life, and give you the positive feelings that go along with nurturing your baby in a way that only you can do. However,  if breastfeeding isn’t going smoothly– nipples are sore, baby not gaining weight, low milk production – those conditions can be depressing as well. It’s important to have a strong support system in place so any breastfeeding issues can be addressed before little problems turn into big ones.

There are three types of postpartum depression, varying in severity.

The first type is often called ‘baby blues’. Since 70-80% of new moms will experience this type of temporary depression, is so common that it’s considered normal. New mothers are suddenly dealing with the reality of 24/7 responsibility for this new little person in their life, at a time when they are hormonal, sleep deprived, and overwhelmed. Giving birth is hard work, and even with an uncomplicated vaginal delivery, there are often physical issues as well, like constipation, stitches, engorgement, sore nipples, and just plain physical and emotional exhaustion.

Symptoms of the baby blues can be crying for no reason, being restless, feeling anxious, restless, lonely and sad. Rational thought goes right out the window when you are in the early stages of motherhood.

I vividly remember one time two weeks after my first baby was born. My husband came into the kitchen and found me leaning over the counter, head in hands, sobbing uncontrollably. He thought something terrible had happened, and the first thing he said was “What’s wrong? Is the baby okay?’ Between snuffling and snottty blubbering, I managed to get out the words “I can’t find the paprika!” Normally, this wouldn’t bother me at all because I hate to cook, and I wouldn’t probably wouldn’t have used paprika for another year or two, but at the time, that missing spice was enough to rock my postpartum world.

The second type of postpartum depression is more extreme, but still not uncommon. About 20% of moms experience this moderate depression.  The symptoms are basically the same as ‘baby blues” but they are more severe and longer lasting – typically beginning soon after birth, and usually lasting a few weeks. Signs of postpartum depression an include loss of appetite, loss of interest in sex, lack of happiness in general, insomnia, and intense anger and irritability.

It should be noted that many of these symptoms, including loss of libido (the last thing most new moms are thinking about is sex); insomnia (goes along with feeding a baby during the night). and irritability also often accompany the less serious ‘baby blues’ The difference is in the degree and duration of the symptoms. Baby blues come and go and don’t usually last very long. You have mood swings and cry at the drop of a hat, but then you get over it, usually within a few days.  With moderate postpartum depression, the downs are more intense and it takes longer to snap out of it – often several weeks. The depression can be intense, and may affect your ability to function effectively on a daily basis. However, it usually goes away within a few weeks.

There is a third type of postpartum depression called “postpartum psychosis” It is much rarer, occurring once or twice in every 1,000 births. It usually  develops within the first two weeks after delivery, and can last for months.  Many of the symptoms are the same as the ‘baby blues’, but this is a very different and serious condition. Symptoms may include withdrawal from friends and family, deep feelings of inadequacy, hallucinations, confusion, paranoid delusiona, difficulty bonding with your baby, or even attempts to hurt your self or your baby..

The symptoms of postpartum psychosis are much more severe, and can last much longer than other forms of depression if it goes untreated. There is no single definitive test to diagnose postpartum depression, so the diagnosis is made based on the symptoms you describe to your doctor, so be completely honest with him.  Moms with severe depression that is affecting their level of functioning and lasts more than a few days should see their doctor to have tests to screen for medical causes of the depression.

Red flags for serious depression need to be taken seriously. See your doctor right away if:

It’s important to get help immediately if you have any of these symptoms. These feelings can be overwhelming, and the sooner you seek help, the sooner you’ll feel better and be able to enjoy being a mom without feeling so stressed out.

Here are some suggestions on what you can do to help you get through the PPD if it does occur.

Your doctor may recommend the use of medication to help you deal with the depression. The babies of moms with PPD have a greater risk of development delays and as well as difficulty interacting with others than the babies whose moms aren’t depressed, so it’s better to treat the depression than to wean the baby and lose the protective benefits of breastfeeding.

Nursing mothers generally  have less PPD than formula feeding mothers, because nursing your baby can lower your stress level overall, encourage bonding with the new little person in your life, and your  nipples are sore, the baby isn’t  gaining weight, or your milk production is low, those conditions can be depressing as well. It’s important to have a strong support system in place so any breastfeeding issues can be addressed before little problems turn into big ones.

According to Dr.Thomas Hale, author of Medications and Mother’s milk, the preferred class of antidepressants for breastfeeding mothers is SSRIs (selective seretonin reuptake inhibitors). Side effects from SSRIs are low, and they are very effective. Babies more than a few weeks old are able to metabolize and excrete drugs in much the same way that adults do, so any side effects are minimized even more with older babies. Dr. Hale’s “choice hierarchy” for breastfeeding mothers is as follows:

St John’s Wort is a herbal remedy often used to treat depression. There is some evidence that it may be helpful in cases of mild depression, but with major depression, it’s not been found to be effective.

Some evidence suggests that supplementation with Omega-3 fatty acids may help prevent or treat minor depression, but more research is needed. It certainly won’t do any harm to try it.

For more information about specific medications to treat depression during lactation, Dr. Hale’s website infantrisk.com is a helpful resource to share with your doctor as you work together to form a treatment plan to deal with your depression. You can also find more information in my article Drugs and Breastfeeding.