Will breastfeeding affect the results of a pregnancy test? 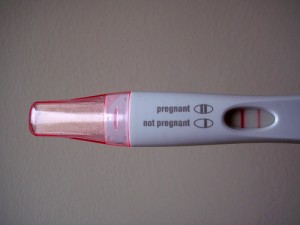 Question: I’m nursing my one year old, and I haven’t had a period yet, but I’m having signs of pregnancy – breast tenderness, nausea in the morning,  light spotting – and I feel unusually tired all the time.

I hadn’t planned to have another baby so soon, but hubby and I will be thrilled either way. I really want to know if I’m expecting again, but I don’t know if breastfeeding will affect the results of a pregnancy test, and I’m wondering if I will have to wean my baby if the test is positive.

Answer:  Pregnancy tests are just as reliable during lactation as they are when you’re not nursing.  They measure the amount a specific hormone contained in your urine. This hormone is called hCG (human chorionic gonadotropin) and it’s only present when you’re pregnant.

After the fertilized egg is implanted into the uterus,  the placenta starts to produce hCG. Once there is enough hCG to enter the blood stream and urine, the test will be positive.

Levels of hCG can usually be detected in the urine  6-10  days after fertilization or 7-14 days after the egg is implanted — about day 20-24 of your menstrual cycle.

If the hormone levels aren’t high enough to be present in the urine, the test will be negative. Blood tests given by your doctor can detect the presence of hCG sooner than urine tests, because the hormone shows up in the blood before it does in your urine.

Pregnancy tests may give false negative results, but almost never give false positives, because hCG is only present when you’re pregnant. The hormones present during lactation don’t have anything to do with hCG (often referred to as the ‘pregnancy hormone’. ) If the test is negative, you may still be pregnant, so it’s a good idea to take the test again a few days later.

Since you aren’t having periods, the only way to be sure is to take a pregnancy test, then repeat it if it’s negative. If it’s positive, you don’t have to stop nursing. The article Nursing During Pregnancy and Tandem Nursing will give you more detailed information about pregnancy and lactation.