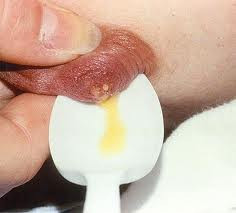 Question: Hi, I have a 2 1/2 year old daughter who who shows no sign of weaning anytime soon. I’m almost 16 weeks pregnant and expect I will tandem nurse after the baby is born. I have some questions about colostrum.  Should I prevent my almost 3  year-old (at the time) from nursing for a few days, while I’m in the hospital, so the new baby can get colostrum, or would there be enough for all? Is colostrum something that runs out? Or does it last for a few days no matter how much is consumed?

Answer: Colostrum is a very interesting substance. Your breasts begin producing it during pregnancy, and it is the first food available for babies immediately after birth before your milk actually “comes in.” It contains lots of antibodies and helps protect the vulnerable newborn from infection by coating his intestines and protecting him from viruses and bacteria. It also has a laxative effect, which helps him excrete meconium (the black tarry fetal stool he is born with) reducing the incidence of jaundice. It contains growth factors that help prepare his digestive system for absorbing and digesting milk. It is very easy for the newborn baby to digest, and is exactly what he needs to eat during the first days after birth.

Colostrum is different from mature milk in other ways as well. It contains more salt and protein, and less sugar and fat then mature milk. It even looks different. It ranges in appearance from clear and watery to thick, yellowish and sticky. Some expectant mothers find that they leak lots of colostrum during pregnancy, while others are able to express only a drop or two. The amount of colostrum produced prenatally has no relationship to the amount of milk the mother will produce later on.

Colostrum is very concentrated, and the volume produced is very small. Most mothers will have teaspoons rather than ounces. During the first 24 hours after birth, an average of 37 ml of colostrum is produced (an ounce contains 30 ml). Babies take in an average of 7-14 ml at each feeding. 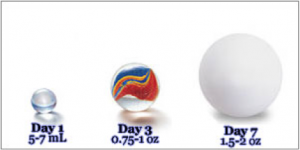 Baby’s  stomachs are very small at birth, as shown in the picture on the left. They aren’t designed to digest large volumes of milk until after mom’s milk comes in.

When the mother’s milk comes in a few days after birth, it is called “transitional milk.” This mixture of colostrum and mature milk is produced from 4-10 days after birth. As the volume of milk increases, the protein content decreases and the amount of sugar and fat increase. Transitional milk may look yellowish due to the colostrum content. After 10-14 days, mature milk is produced. It still contains lots of valuable antibodies and immune factors, but no more colostrum. That’s one reason that early breastfeeding is so important. Even if a mother nurses her baby for only a short time after birth, she is giving her newborn a precious gift that won’t be available to him later on.

Back to your original question: I wouldn’t worry about not letting your older child nurse immediately after your new baby is born. I would just make sure that the baby nurses first. This is something that she is going to have to get used to anyway, and she is old enough to accept that (she may not like it, but she will learn to deal with it). Becoming a big sister and having to share her “num nums” (or whatever she calls them) with a new baby is going to be a difficult enough adjustment without having to explain to her why she suddenly can’t nurse at all. As long as the new baby goes first, there should be no problem.

The article Nursing During Pregnancy and Tandem Nursing might help answer some of your questions. My 2 1/2 year old daughter  nursed while I was in labor with her younger sister, which helped stimulate my contractions. She continued to nurse until well after she was four, and I never had any problems with the girls sharing their “milky sides.”