Nikki’s Breastfeeding Struggles and Why Mom is Always Right

Grace was born on January 28, 2013 after a long difficult pregnancy. She was a healthy 9 lbs 14 ounces and aside from some blood sugar issues, had a complication free birth. She latched quickly and seemed to love nursing! 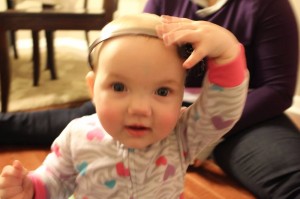 About a week after we went home, I noted that she spit up often. I mentioned it to the pediatrician who told me I was over feeding her. Thankfully I didn’t listen to the advice to put her on a schedule.

When Grace was a month old, she had an episode of vomiting then stopped breathing. She turned blue. It was the most terrifying thing I have ever experienced. We rushed her to the ER where many tests were run. They told us this happens often to babies, kept us overnight to observe her, then sent us home with a diagnosis of reflux and a prescription for Zantac. By this point, Grace was also screaming for the majority of the day and night. I had stopped leaving the house because she would just scream constantly. Play dates were impossible, even a simple trip to the grocery store could be a nightmare. I spent many nights with her in the Ergo bouncing on a large exercise ball willing her to just go to sleep while she alternates between screaming and nursing.

We began the Zantac. I also removed dairy from my diet, thinking that perhaps Grace had an allergy. She was growing well, and nursing constantly. Neither the Zantac nor just removing dairy seemed to help with her issues though. She also developed a red, raw, bleeding diaper rash at that point despite using cloth diapers and no wipes.

At six weeks she had an episode of vomiting and diarrhea so severe that she was hospitalized for two nights on an IV. She was terribly dehydrated and lethargic. At this point I was advised to remove soy from my diet also. She kept on growing despite all of her vomiting, and I credit her constant nursing for that.

Around 4 months we stopped Zantac because it didn’t make any difference and began Prilosec. She also started a probiotic.

At 5 months, I cut gluten from my already limited diet. This is when we noticed a bit of a change. She no longer screamed 90% of the day and began progressing more with her milestones. Her diarrhea and vomiting continued and her diaper rash persisted but she appeared to be improving as a whole.

At 6 months she weighed 19 lbs 8 ounces. We were given the go ahead to start solids and told that this would help her reflux issues. 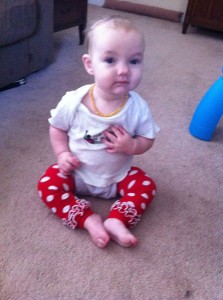 Her first food experience was watermelon. We noticed that she would begin to spit up/vomit a few hours after each new food. We attributed that to her learning to accept solids and her stomach needing to mature.

At 7 months I gave her a bit of rice. 2 hours later she began vomiting to the point that she was lethargic and extremely sleepy. This lasted throughout the night, I took her in to the ER the next morning and was told she had a virus. She was given fluids and had blood work done because she was also bruising very easily. We also noticed that she had dropped over two  lbs in a month. When we followed up with her pediatrician, they told us to stop all solids until nine months because some babies simply matured later.

She nursed like crazy and I kept with my gluten/soy/dairy free diet until 9 months. At her check up, her weight had been restored but she still was vomiting, and had an awful rash. We were referred to a gastrointestinal specialist who referred us to an allergist.

By this point, I had done a lot of research on my own and found that her symptoms were very consistent with a disorder called Food Protein-Induced Entercolitis Syndrome (FPIES).

Our appointment with the allergist confirmed my suspicions. Grace has both chronic and acute FPIES. This means that she can react to foods within hours or a reaction can build up over days or even weeks. The diaper rash, stool, blood in diapers, and vomiting are all symptoms of FPIES. I was advised to cut red meat and caffeine out of my diet, which has resulted in a great change in Grace.

At this point, she will turn one in ten days. She has no known safe foods. She is 100% breastfed and I have a short list of foods in my diet. She is thriving and growing and meeting all of her milestones. We will be beginning to trial foods in the near future after we complete some additional testing to rule out other disorders.

Nursing a one year old exclusively is exhausting at times. She does not sleep through the night nor would I ever expect someone on a completely liquid diet to do so. She nurses at least once an hour during her waking time. She naps more than other babies her age. She can’t be distracted with beans of bananas while I prepare dinner for my husband and I so I have to be creative sometimes. When she is hungry, she needs milk now! She also is too little to understand but is getting to a point where she wants food so sometimes I eat lunch hiding around a corner or I wait until she naps to quickly make something. Her birthday is approaching and there will be no smash cake. 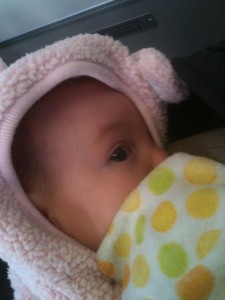 I wish Grace didn’t have to go through this, but I will do anything to ensure I am able to continue to provide her with breast milk. I have put our plans of having another baby on hold indefinitely because I would hate for my milk to dry up.

Breastfeeding a child with FPIES has certainly shown me what I am able to do and makes me appreciate my body so much more. Anytime I feel down on myself, I am reminded that I am able to make the most perfect food for my baby to keep her growing and thriving. It doesn’t get better than that!