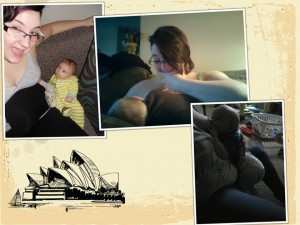 My nursing journey. It was arduous, to say the least. I had a traumatic emergency cesarean, and Cain lost a lot of weight afterwards. The LC’s all said his latch was fine, but my milk didn’t come in for five days, and he wasn’t transferring. I found out (after learning what it even was) that he has a tongue tie. Unable to afford the procedure to fix it (700$ plus revisions, say what?), or make the trip to the appropriate doctor, I committed myself to EP-ing. My fiance helped me buy a brand new $300 breast pump, and my mother helped us buy about a hundred dollars worth of bottles and other accessories. All the while continuing to put him to my breast; crying and hoping and praying he would someday latch again.

At four months old, that beautiful moment happened. He was content and peaceful. I took the pacifier out of his mouth, and brought him to my breast for what seemed like the millionth time. He latched on and started drinking. Then he fell asleep. My heart beamed like it never had before. I wept silent tears of joy while I watched him, for the first time, contented at my breast, sleeping and sipping. It wasn’t easy from then on, by any means, but about a month later I was done with the pump and he would nurse side-lying without fail.

He still had trouble nursing any other way though. Until last week. He started wanting to be cradled, and falling asleep nursing while I was walking and rocking him. I must admit, I thought it was a fluke, but I really think that we have finally arrived. He turned 8 months yesterday unresolved tongue tie and all, and WE HAVE FINALLY ARRIVED.

I just wanted to share this with all of you, I am so proud of both of us. I want to give hope to anyone struggling. By god, don’t give up.

The pictures (I will be the first to admit, I am not very good at making collages) 1. Pumping and playing, 2. The first latch caught on camera, and 3. Drive-by nursing like a pro, taken today

Parenting is hard no matter how you slice it, but sometimes we do things without …