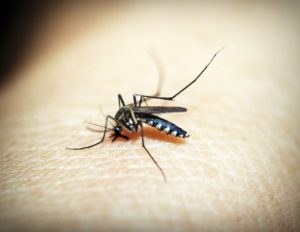 If you’re pregnant and haven’t been living in a cave for the past year, you’ve probably heard about Zika. Chances are you’ve been concerned (okay, more like worried sick) about it.

Almost all the news about Zika is bad, but there are a few  (sort of positive) things to keep in mind: not all mosquitoes carry the virus (only females of the Aedes species); not all women who get bitten will pass it on to their babies; there aren’t many cases in the US so far;  they won’t spread to all parts of the country because they don’t like cool weather; and researchers all over the world are working on a vaccine.

And that’s about it as far as positive news goes when it comes to Zika.

I’m not gonna lie: If I were pregnant right now, I’d be afraid to leave my house. I’d crank up the AC and wear tights and long sleeves and gloves and maybe a ski mask, and coat every inch of exposed skin with insect repellent.

I realize that might not be a practical approach if you have a job. Or other kids. Or a life.

How are you supposed to do to protect yourself and your baby? And why do mosquitoes even exist? Do they serve any useful function other than to make peoples’ lives miserable? It’s not enough that they cause malaria and West Nile fever and heart worms and itch like hell, and they’re so small that you really can’t get away from them, but now they cause life threatening birth defects, too?

The more we learn about Zika, the more frightening it gets. Scientists now say that it’s “scarier than we thought”, which is the last thing you want to hear from the experts who are trying to figure out what’s going on.

Over 65 countries have reported Zika outbreaks. In the US, the virus is spreading in Florida, and is expected to spread to Gulf states like Texas and Louisiana soon. Due to “The growing spread around the world and basic gaps in knowledge about the virus’s devastating complications in babies, the World Health Organization recently declared Zika a global health emergency”.

Like pregnant women don’t have enough to worry about already.

The Zika news changes – literally – every day. It’s hard to keep up with it, but it’s important to stay informed, so here’s a link to the latest info for pregnant women (as of September 6th) http://www.nbcnews.com/storyline/zika-virus-outbreak/world-health-organization-broadens-zika-sex-guidelines-n643496

And then I came across this today: “Researchers discovered that mice injected with ground up eyes from infected mice also became infected”. So apparently, the Zika virus can also be transmitted through tears. And I’m going to have nightmares about the idea of what it must be like to work in one of those research labs.

There really isn’t a lot of good news about Zika. There is no treatment, no cure, and no vaccine, although researchers are working frantically around the clock to change that.

The WHO (World Health Organization) now advises anyone (male or female) who has been in a Zika affected area to practice safe sex for at least six months, instead of the eight weeks they originally suggested. We’ve learned that the virus is easily passed through body fluids, and it can live in semen for months. It can be transmitted by a partner who doesn’t have any symptoms, and it causes more damage to fetuses and babies than previously thought. It can cause abnormal brain development at any stage of pregnancy, although it’s more likely to result in serious defects like microcephaly during the first trimester. New research shows that it can cause long term health problems like hearing or vision loss as well. Zika babies will need to be followed closely for years because we just don’t know what to expect.

Zika is spreading further and faster than anyone anticipated, and the CDC (Center for Disease Control) has just about run out of funds to fight it. Experts can’t agree on whether to fight it by spaying aerial pesticides, or introducing genetically modified mosquitoes, or fining people who leave standing water in their yard. Congress is gridlocked over funding, but they’re supposed to come to an agreement by the end of September.

Woman are advised to delay pregnancy if they live in areas with active Aedes mosquitoes. Those who do get pregnant are warned not to travel to Zika infected areas, and to take precautions to avoid bites, like staying inside as much as they can, wearing clothes that cover as much skin as possible, and using insect repellent on exposed areas. Formulas containing DEET, picaridin, and lemon eucalyptus oil provide the safest and most effective protection during pregnancy.

As if all this wasn’t bad enough, pregnant women are twice as likely to get bitten by mosquitoes. Mosquitoes are attracted to carbon dioxide (expectant moms exhale more air when they’re carrying the extra weight of a baby), and to heat and sweat (body temperature is higher during pregnancy).

So what do we know about breastfeeding and Zika?

Like many viruses, the Zika virus can transfer into breast milk. However, according to the WHO, there are currently no documented reports of Zika being transmitted to a baby through breastfeeding.

Based on the available evidence, the many benefits breastfeeding provides to both mother and baby outweigh the risk of Zika being transferred through breast milk.

The CDC says: “To date, there are no reports of infants getting Zika virus through breastfeeding. Because of the benefits of breastfeeding, mothers are encouraged to breastfeed even in areas where Zika virus is found.“

There are many things we don’t know about Zika:  exactly how the virus is passed into the milk; how long it stays in the mother’s system; whether an infected mother produces antibodies against the virus which are transmitted to her nursing baby (as in the case with many other viruses or bacteria); exactly what effect Zika will have on the baby; the long term safety of insect repellents or pesticides; and what type of damage the virus does at different stages of pregnancy.

It’s possible that mothers may create specific antibodies and pass them to baby in her breast milk, which could act as a vaccine, and possibly prevent or lessen the effects of the virus.

I certainly hope so, because it’s about time for some good news about Zika.

Breastfeeding in the context of Zika virus, Interim guidance, 25 February 2016, from the World Health Organization

Question and Answers: Zika virus infection and pregnancy, from the US Centers for Disease Control and Prevention

Infant feeding in areas of Zika virus transmission, from the World Health Organization

Babywearing as the Biological Norm My focus as a mother supporter, aka doula, is …