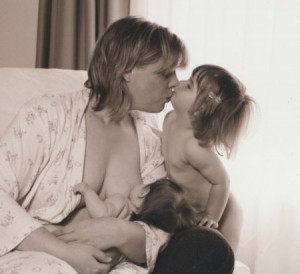 Question: My daughter is 2  1/2 and usually only asks to nurse at bedtime. Sometimes I don’t mind, but other times I feel resentful because I have just finished nursing my one year old son and I feel like she’s manipulating me. I like the closeness with her, but at times I feel so touched out and would rather just lie with her and cuddle, but I don’t want her to feel rejected. Do you think she’ll outgrow it and it will work itself out?

Answer: I can totally relate to what you are going through. My first three babies all weaned themselves by the time they were a year old, and I wasn’t ready for any of them to stop nursing that early. I really wanted to continue nursing my toddlers, but they all lost interest in nursing around the time they started eating lots of solids and became mobile (around 8 or 9 months).

With my fourth child, it was a whole different story. She loved to nurse, and since she didn’t develop any attachments to thumbs or security blankets (unlike her older siblings), she used the breast as a pacifier as well as a food source.

When she was two, and still nursing up a storm both day and night, I became pregnant again. My milk dried up almost immediately after I became pregnant, but she didn’t care if she was getting anything when she nursed or not. She continued to breastfeed all during the pregnancy. It got to the point where my nipples were so sore that I  would grit my teeth and let her nurse on my dry breast for five minutes at bedtime, but  I was not enjoying it and was really ready for her to wean.

She continued to nurse after the new baby came, but she was limited to nursing for just a few minutes at bedtime, and she accepted that. I continued to let her nurse in spite of my mixed feelings because it was clearly still very important to her.

I remember one time when she was three and had asked to nurse at some point during the day and I told her no, she had to wait till bedtime.  She didn’t argue, but a few minutes later she came up to me and said “Mommy, I know I can’t nurse right now, but is it okay if I just touch your Milkyside?” (That was her nickname for my breasts – in fact, I have a license plate that says MLKYSIDE and I knowpeople who pass me on the highway are wondering what the heck it means).

When she said that, I just melted. I decided that if nursing was really that important to her, then I could wait until she was ready to give it up on her own, in spite of my mixed feelings. She gently laid her little head on my breast and patted it for a few seconds,  and then she was fine until her five minute bedtime nursing.

She finally stopped nursing completely when she was four. She is all grown up now, but still has fond memories of nursing. I am so glad that I didn’t force the issue with her, and I have fond memories, too. Babies really do grow up way too fast, and while you worry now about whether your little one will ever sleep through the night or wean, all too soon you’ll be worrying about watching her get in the car with a teenage boy and driving away.

If you think about the 18 years that children spend at home as a big pie chart, then the piece of the pie that represents the time they spend nursing is really a small piece, even if they nurse for several years. This time of intense need and attachment doesn’t last forever, and she will stop nursing when she’s ready.

I Should Talk About Weaning