My One Night Stand with a NIP Slip

I didn’t know I was The Badass Breastfeeder when Jack was born. I knew I wanted to breastfeed, but I had no idea that was unusual. I didn’t know some people found it offensive. I didn’t know it tugged at the heartstrings of mothers who weren’t able to breastfeed or didn’t have the support to reach their breastfeeding goals. I certainly had no idea that there was a multibillion dollar industry trying to destroy my attempts. I didn’t think twice about breastfeeding in public. I bought a “hooter hider” because I thought it was something that you were supposed to buy just like a crib, a stroller and a changing table. 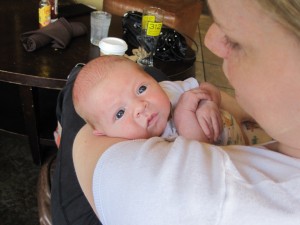 When Jack was about 2 weeks old my sister and I went to a restaurant down the street from my house. I breastfed Jack there with no cover. I didn’t think the cover was needed at this hippie-themed restaurant. No one said anything to me except “he’s so cute,” “congratulations” and “what’s his name.” I wasn’t braced for harassment. I didn’t think that sort of thing happened. I had never seen a person breastfeeding in public, but I had also never heard of it being discouraged. Clearly, I had no expectations. Before Jack came along I was too busy trying to figure out how to get my high heels higher and my pants tighter. I was completely unaware of the politics that came along with all areas of parenting.
There was one place I did plan to use that NIP slip; my parent’s country club. It is not the sort of place you see on TV. It is very relaxed and it’s a miracle if five minutes goes by without hearing someone drop an “f” bomb. My kind of place. I had spent summers hanging around my Dad’s golf buddies, cursing up a storm, laughing until my face hurt and going beer for beer with the biggest guy. Now I was someone’s mother. The dynamics were changing. I was a “lady” now. I stopped getting cursed in front of and now no one offered me endless amounts of beer. I planned to cover myself while breastfeeding when we finally made it there to show off Jack.
When Jack was about a month old we made the trip. All of my parent’s friends showed up. We took up almost all of the outdoor patio tables. It was time to breastfeed Jack. I kept thinking of this NIP cover and how I dreaded to bring it out since we had gotten so used to life without it. On the other hand I had never used it so maybe it will be fun. My mother encouraged me to use it saying she wasn’t sure how people here would react to breastfeeding. I didn’t know at the time that I would come to not care what other people think. I pulled it around my neck and over Jack. I instantly felt awkward. Jack was distracted by this material against his head. I messed with the opening designed so that you can look down at the baby. I tugged and pulled and readjusted. Jack latched and unlatched and looked around. I was drawing an enormous amount of attention to myself. I had never been uncomfortable breastfeeding in public and now I was totally uncomfortable and embarrassed that I was causing such a commotion. I finally took it off, put it in my bag and haven’t seen it since.

Now when we make it to the country club I march around breastfeeding Jack just a confidently as I marched around in my bikini the summers before. Jack gets distracted and pops off sometimes leaving my nipple bouncing there shiny with breast milk. I just laugh at all the people who divert their eyes. I roll my eyes at my mother who says “Abigail, pull your shirt up.” I breastfeed everywhere. I breastfeed on crowded buses, baseball games, restaurants, grocery stores and parks. You name the place, I am sure I have had my boob out there. 99% of the time I am completely comfortable. However, I am also a human being living in America who is painfully aware of the stigma. Just once in a while, when the bus is so crowded that I am smashed up against all the other bodies and Jack begins to cry and I know the only way to address it is to give him boob, I go “oh man, why now Jack?” But I will never withhold his boobie. If he needs it he gets it. I just try to find the fun in the situation. I watch the other people’s faces trying to look away. Usually there is one person brave enough to smile and that’s when Jack unlatches with a loud “SMACK” and smiles right back. I just stand there and smile too with my boob sitting there for the world to see. I like to think that most people don’t care and some are even a little impressed. I know not everyone chooses to breastfeed without a cover and that’s totally cool. Everyone should breastfeed how they feel comfortable. At the end of the day it is about breast milk. It’s not a competition.
I will continue to breastfeed in public without a cover to normalize breastfeeding for Moms and babies.
Abby Theuring, MSW
**If you would like support breastfeeding in public please check out my course Become a Badass Public Breastfeeder in 7 Days.
Share 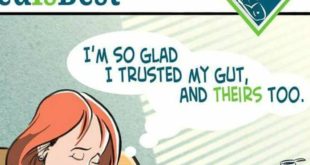