Chaos and Disorder: I Care About Trucks

Today on our way to the park, Jack sees a truck down the street and says “duck!” This is what he always says when he hears, sees or even senses a truck nearby. Today there’s a whole construction scene going on, as is typical in Chicago anytime it is not –20 degrees. I say, “Oh yeah, there’s a truck!” and stand there with him for a moment. Then I start to walk toward the park again. He jerks around in my arms to see the truck around my head. I shift him in my arms, slightly annoyed for a second that he’s throwing my balance off. My plan was to go to the park, and so that is where we are going to go. Parks are made for kids to play so we shuffle ourselves off to the park like good little citizens so that everyone is where they are supposed to be. My plan will be completed when we reach the park, and all will be right in the world. I plan things out, I make them happen. But as we move away from the construction site, I can feel myself trying to meet my own need for order. I stop on the sidewalk and put Jack down. He walks toward the trucks. He knows which way the park is and he is not going that way. His eyes are huge with awe at the scene in front of us.

I have always strived for order and rigidity in my life and at times I find myself holding Jack back from exploring what he wants to explore in order to meet this need of mine. I have come a long way since I declared “Embrace the Chaos!” as my new motto in motherhood when I found my old habits fit very poorly into the parenting philosophy I now believe so deeply in. However, I still struggle to embrace the chaos at times when I get caught up in my own need for things to be black and white. It is, of course, not even really chaos. It is nature. It feels chaotic because we have gotten so far away from it as adults, as a society. 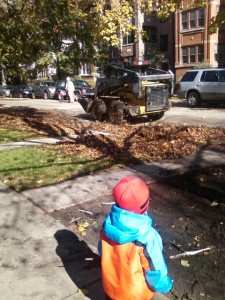 I used to make jewelry. I have a bead organizer with tiny compartments to put all the different kinds of beads in their place. The big ones, the small ones, the red ones, the green ones, the round ones and the square ones. I vividly remember organizing it. Picking up one bead at a time and deciding what slot it would go into. Sliding the adjustable slots bigger and smaller so that it fit the beads in just so. I also remember digging my finger into a slot and pulling out a tiny bead because it had fallen out of its proper slot and putting it back its place. There, things are right now. When Jack started to become mobile he used to wiggle himself up to it and look at it. He would rock his body back and forth and make the beads move around. They made a cool sound. I was still hanging on to this former part of my life. This life of order and sense and logic and slots. It made me nervous when he rocked it. I was afraid the beads would bounce around. Then he got stronger. He also got more demanding and I could feel my past life crumbling away. Following his lead started to feel right. One day he picked this giant bead organizer up over his head. Oh my god, he’s going to fuck the whole thing up. He tipped it sideways. Oh shit, he’s going to ruin it all. The beads rained down out of their slots. They pooled at the bottom. There was nothing I could do. He thought this was the greatest thing since wooden spoons. His eyes got wide and then he laughed. I looked at my baby in the eyes and laughed with him. I don’t see it as something that I will go back to later in life. Jewelry making, maybe. Rigidity, hopefully not. I don’t think that I will reorganize the beads when he goes to school or when I have more time. I am forever changed by him. I don’t care about the damn beads anymore. I don’t care how they are stored. I don’t care about order or logic. I care about the course we are on right now. I care about Jack finding his own way. I care about following Jack down whatever street he walks. I care about trucks.